By November 1979 I had been in my first full-time job, at an insurance company, for around 2 years. It was soul-destroyingly dull, a dullness only alleviated by some of the good people I worked with and also the chance to spend my lunch & post-work hours hanging out in the local independent record shop - a matter of yards away. I spent a huge amount of time (and money) in the place and got to know most of the staff quite well. One day, the owner of the shop, Chris, took me aside and asked if I'd be interested in a Saturday job over the Christmas period. I gave it my full consideration for a nano-second and said yes. 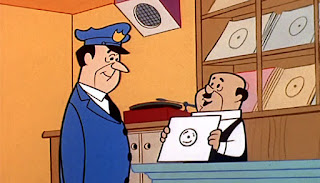 For the next month & a half I had the time of my life. At the end of a boring week in the office, the weekends were a riot of music, laughter and alcohol. The shop was crazily busy, but in those pre-Sunday-trading days it left myself and the rest of the staff Saturday evening and all day Sunday to hang-out, drink and talk - and all we talked about was music. Passions sometimes ran high. In the midst of a heated Jam/Clash discussion in the pub one evening, I stood up, threw a pint over someone and stormed off into the night! It all seemed very important at the time.

All too soon the Saturday Gig was coming to an end. By the second half of January 1980, business had returned to normal and my extra pair of hands were superfluous. During one of the final shifts, Chris was mulling over his pre-orders for forthcoming single releases. At the time a big 7" single might sell 50 copies or more instore and were often ordered by the box (25). He read a few names out to gauge the opinions of the staff and we'd reply with '5', '10' or 'cover it' (meaning just order one copy). When he came to Toyah's 'Bird in Flight' he answered his own question before any of us could jump in - 'I'll just cover it'. Now, at the time I'd been quite partial to her first two releases 'Victims of the Riddle' & 'The Sheep Farming in Barnet EP' and had heard the promotional copy of this new one - slightly dark indie pop, though we no doubt called it New Wave back then, and her best effort so far I thought (and way more interesting than what she'd go on to produce). 'No, you'll need a box' I blurted. Silence. Then a few sniggers from my cohorts. Chris just looked at me. 'Really? You think so?' Of course at this point with all eyes on me I began trying to retreat from my position, but to no avail - Chris ordered 25 copies.

Back to being just a customer, one lunchtime on the week of Bird in Flight's release I tentatively stuck my head round the door of the shop half expecting a torrent of abuse and/or ridicule for my ludicrous ordering suggestion, but found that nearly all 25 copies of the Toyah single had been sold and another box was on order! I'm not sure who was more amazed - me, Chris or the rest of the staff!

Only a week or so later, Chris offered me a full-time position to replace someone who was moving on. Whether the Toyah suggestion played a part in his offer I don't know, but, in my mind, the song looms large as a major turning point in my life. I quit the office job and stayed with Chris's company for 7 years before leaving to run my own little record shop for a further 14.

21 years later, in the early weeks of the 21st century, after a period of struggle I finally bowed to the inevitable and closed my shop, finding myself, for the first time in my life, unemployed. Chris & I had remained good friends over the intervening years as fellow indie retailers and one day, soon after my business folded, he offered me some shifts in his shop until I could sort myself out with a new job.

So it was, that my career in the 'Music Business' (for the want of a better term) ended as it had begun, with a few happy care-free shifts, back where it had started half a lifetime earlier.

Oh, that's a great story, and so interesting to read how you first got into it all too. (Love those images also!) I may only have served three and a half years in a record shop but I'm very glad I did. The first years there were the best for me, it was a nice little team - and working with such a good manager made all the difference!

Nice story. It was always one of my dreams to get a job in a record shop but it never quite happened. I did apply to one shop once but even the dog end days of the 70's I was clearly too anti-capitalist and idealistic even for a job selling discs. The bloke who owned the shop told me so in no uncertain terms. I don't think I realised they actually wanted to make money!

Anyway, what I really wanted to say was thanks for coming over to my blog. Please visit again. I'll be back here.

Thanks Mr Bear. It was the best of times and was about all I wanted to do from aged about 11 onwards - some kids wanted to be a train driver, I wanted to work in a record shop. Like you, I wasn't so hot on the business part though - just ask my accountant! I'm a frequent visitor to your place(s) actually, but an appallingly bad commenter - a fault I'm addressing.

Thank you C. I'm sure if your old manager could read your comments he'd be very touched! By the way, when can we expect Part 2 of your Record Shop Memories?