Down By the River

After the ankle returned to full working order, following my little mishap in April, I initially restricted myself to walking only on country lanes and paths - good solid flat surfaces that presented little risk of another painful twist. Gradually though, I've carefully reintroduced a series of favourite local circular walks that wander off-road and down along the uneven surfaces beside the river.

There's one particular spot on the riverbank that I can't pass without at least pausing for a moment, though quite often I will stand there in silent contemplation for several minutes. It's a very simple outlook along a straight passage of what otherwise is a fairly meandering river, but for some reason it rarely fails to imbue me with a tremendous sense of well-being. If my camera is to hand, I'll invariably take a photo in an attempt to capture the moment - and fail to completely. For this reason I have dozens of shots from the same spot. Here's yesterday evening's effort, not bad, but you should've been there. 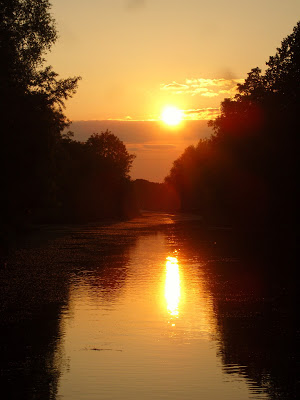 That is a truly lovely view. Thanks for 'Sunspots', too. Haven't heard this for ages.

Breathtakingly beautiful. Such a fabulous photo and I appreciate that the reality is of course even better, so I can totally understand why it's a favourite (sun)spot!

Superb sunset and nice you are getting out and about...I get cabin Fever after a few hours....nice tune too.

I don't know what it is about that particular spot, but regardless of the weather, time of day or season, it's always a delight to spend a few minutes there.