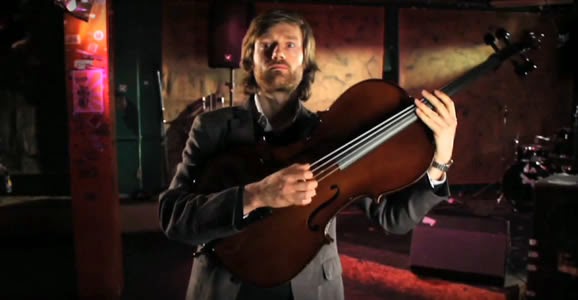 Last week, in a tiny subterranean bar, I attended my third David Thomas Broughton concert in five years. It was by turns funny, scary, touching, confrontational and beautiful, but above all it was, as always, a unique experience. Part singer-songwriter, part performance artist, Broughton treats his songs as raw material, to be dissected and reassembled at will, looping his voice, his guitar and various electronic gizmos, while incorporating any inanimate objects that come to hand. He wanders off mic and off stage, singing on the move, in the middle of the audience, even from half way up the staircase leading out of the venue.

Broughton's sonorous baritone (think a 21st Century Jake Thackray) is currently complemented by The Juice Vocal Ensemble, with whom he has recorded one of 2014's finest albums, 'Sliding The Same Way'. Over Juice's often unsettling, aural backdrop, Broughton's clipped Northern diction tackles dark themes on the LP, sometimes using very blunt language. 'I will glass every one of you pricks in this bar', isn't a line you'll find anywhere in the Folk tradition and was delivered with such mesmeric conviction during last week's concert, that I'm sure I wasn't alone in shifting uncomfortably in my seat. An essential album and an essential live performer.

On first listen, I'm deeply intrigued. Just when I thought I couldn't be arsed to even seek out any 'new' music I find that there is something like a 21st Century Jake Thackray, which is exactly what we need. Will definitely make further enquiries.

Yes I just loved that track....which opens a whole can of worms...like SB I am intrigued...spotify here I come.

He has a Bandcamp page with a ton of streamable stuff on it, but not the new album yet.