Journey with me, back to 1984. At the time I was a branch manager in a small chain of independent record shops - a happy time, if you exclude the owner of the business from the picture. He was highly skilled at making my life, and that of every other manager in the chain, a misery. But let's not dwell on the negative. Towards the end of 1984 the staff in our store each compiled our own personal top 20 singles and LP's of the year and I recently unearthed the original handwritten copy of my selections, thirty years on. 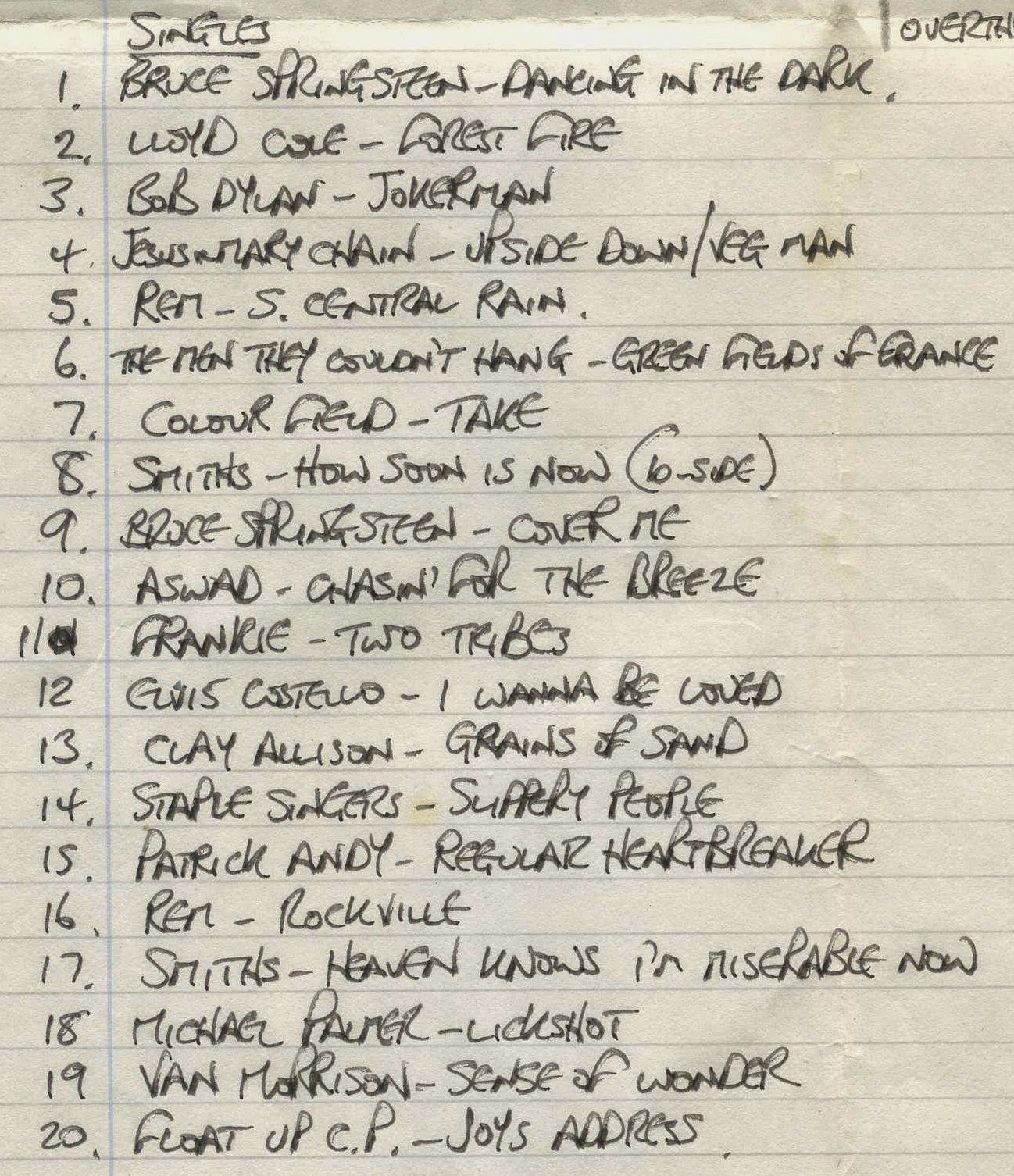 Taking a look through my singles list, I was initially surprised to see three reggae tunes included, as I'm sometimes quick to dismiss any reggae made after 1980. An erroneous generalisation on my part. Aswad's last great moment, 'Chasin For the Breeze', Patrick Andy's melancholic 'Regular Heartbreaker' and Michael Palmer's wicked 'Lick Shot', still sound great to these ears.


Elsewhere, two singles apiece from The Smiths, REM and Bruce Springsteen made it into my top 20. The first Smiths LP and 'Reckoning' were massively important records for me, but, in retrospect, 1984 was a funny old year for this long-term Springsteen fan. A brace of unforgettable live shows rubbed shoulders with a very commercial album that I find difficult to listen to now. 'Dancing in the Dark' certainly wouldn't be at No.1 if I made the list today.

Clay Allison was the name on the sticker of an American import EP I bought in 1984, though by that time the band had re-christened themselves as Opal. The line-up featured Kendra Smith from The Dream Syndicate and former Rain Parade guitarist David Roback. Smith was replaced by Hope Sandoval in 1987 and the duo later found success as Mazzy Star.


The debut Jesus & Mary Chain single was an extraordinary thing to play in the shop, in amongst the endless Nik Kershaw, Sade and Miami Sound Machine tosh. I wasn't destined to become a long time fan of the band, but 'Upside Down' remains a quite magnificent racket. Frankie Goes to Hollywood's 'Two Tribes' is that rarest of beasts, a massive, virtually omnipresent, hit single that I never got tired of hearing. At the other end of the popularity spectrum was Float Up CP, a band who emerged from the ashes of Rip Rig + Panic, issued one fine album to a largely indifferent public, before disintegrating. Four years later, lead singer Neneh Cherry would release 'Buffalo Stance' and have her own massive hit single.


Glancing down the remainder of my favourite singles of 1984, I'm pleased to note that there are no absolute stinkers, no major regrets about what I included (though what I omitted is another matter - no 'C.R.E.E.P.' for example. What was I thinking?). Next time, I'll take a look at my top 20 LPs from 1984. Anyone care to guess what might have made the list?
Posted by The Swede at 09:17

Oh wow! This has made me feel all funny!

So evocative of 1984; there are names on there I had all but forgotten (like Float Up CP) and yes I share your feelings about JAMC Upside Down and remember the impact of Two Tribes so vividly as well.

(I wonder what selections your staff made too?!)

Is Dancing in the Dark the video that had Courtney Cox in it?
:)

In a lot of the reviews for Reckoning the reviewer felt the need to explain what it meant "to reckon" because no one outside of The South says it.

I am disturbed by the absence of C.R.E.E.P. but even more disturbing, perhaps, is the fact that Prince doesn't make the list...in 1984???

You are officially banned from Low Cotton for the next five minutes...joining C and the other ner-do-wells in the hall of shame.

The worst slave driving little tyrants I ever worked for owned a Toy Soldier shop in Louisville Kentucky. A shop full of shiny toy soldiers??? Petty dictators...they tried to fire me but I'd already quit.

Thanks C, I had a feeling you might enjoy this one. I'd be fascinated to be reminded what the rest of the staff came up with!

Erik. Guilty as charged. I'll take the punishment like a man, though I suspect my ban might increase in length when you see the LP top 20.

You picked some corkers there, mate. Special praise due for 'Take', I think. No 'Killing Moon', though? I suppose we can all look back on 'Dancing In The Dark' and cringe a bit now. 'Lick Shot', a tune I've never heard before, is great. I have to agree with you re: 'Chasing For The Breeze', which is quite probably my all time favourite Aswad tune. What happened?

...the new heading picture is fabulous.

Being a man of a certain age and a former record store manager myself I am a big fan of a list. I have quite a few scraps of paper in boxes with fave song lists on them. Your Top 20 is very similiar to my own for '84 although you did introduce me to one track that I didn't know with Michael Palmer's Lick Shot. No idea how that one passed me by, what a great song. Was also great hearing Float Up C.P. again after all these years. I have a feeling the Top 20 albums may include Born In the USA, The Smiths, Reckoning, The Wonderful and Frightening World Of...

Excellant TS and great you still the hand written note....EBay beware!
I have on MP3 file all my top twenties since 2003. I so wish I could go back and see a list like that. I bet there would be a few surprises and on hindsight a few omissions.
But you know the rules ....only one from each artist!!