In May 1994, I spent 10 days visiting the American based contingent of the family in New York. At that time, before they had any kids, it was just my Cousin and her Husband, living in a small apartment on 24th Street. It was the pre-internet era, so I diligently scoured the Village Voice for upcoming gigs and events of interest to fill any spare evenings during my stay, which is how I discovered that Allen Ginsberg was performing at a small independent bookstore in Soho, two days before I was due to leave for home.

Ginsberg sang and recited poetry for a little over an hour at the back of the tiny store. His set commenced with a selection of better known pieces from his catalogue (including 'Father Death Blues'), moving onto readings from his then current book, 'Cosmopolitan Greetings', before finishing with a brace of unpublished works. It was an informal event and at the end there was an unruly scramble to have books and other memorabilia signed. The place was packed to the rafters and it was all moving very slowly. I had a ticket for a gig later that evening, so I had to leave. 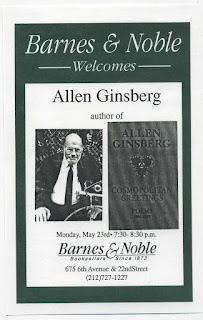 The following evening Ginsberg carried out a very much more formal book-signing session at the gigantic Barnes & Noble Bookstore on the corner of 22nd & 6th, a couple of blocks from my cousin's apartment. There was no performance this time, just a very long queue that snaked around the shop floor. As we neared the desk where he sat, head down, signing endless copies of 'Cosmopolitan Greetings', I was asked my name by a member of staff, who scribbled it down on a scrap of paper and tucked it into the front of my copy. As I edged nearer, a burly security guard stepped forward to address this portion of the queue. He told us in no uncertain terms that Mr Ginsberg would sign our copies of 'Cosmopolitan Greetings' ONLY and nothing else. Furthermore we were not to attempt to speak to Mr Ginsberg or distract him in any way and to move on immediately our book was signed. The piece of paper with my name written on it was so that Ginsberg could write a dedication above his signature without becoming embroiled in unnecessary conversation and thus holding up proceedings. The whole event was something of a military operation, the exact opposite of the previous evening.

Finally, I reached the desk and silently placed the book in front of Allen Ginsberg, open to the title page as instructed. He squinted at the scrap of paper on which the staff member had written my name, but clearly couldn't decipher the scribble. I hesitantly spoke my name to help him out. He looked up. 'You're not from New York', he said. I felt the eyes of security, staff and waiting punters burning into the back of my neck. '......err, no..' I replied, 'I'm from the UK, visiting relatives in the city.' Pause. 'I enjoyed your performance in Soho yesterday'. To my amazement and everyone else's annoyance he continued chatting as he signed and dated my book plus a postcard of him I'd picked up earlier, before handing them back and saying, '...enjoy the rest of your stay.' I told him that I was actually going home the following day, absent mindedly adding that I was bloody terrified of flying. Ginsberg reached out and asked me to give him the book back, he opened it and added a couple of extra marks to the title page, on either side of his signature. I asked him what he'd drawn. 'Wings,' he said, 'for a safe flight home.' 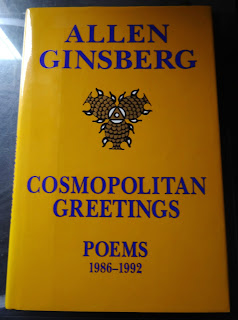 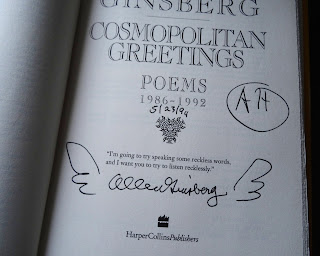 In 1996 Allen Ginsberg released a great single, 'Ballad of the Skeletons', featuring musical accompaniment by Lenny Kaye, Marc Ribot, Philip Glass and Paul McCartney. Not a bad band.  Here's the full studio take (there's a little swearing in this one, just so's you know) plus a clip of a Beat and a Beatle performing an early stripped down version of the song live at The Royal Albert Hall in 1995.

You are the man. At first I thought damn shame you couldn't stick around the night before but this is obviously a much better story. Busted that Barnes and Nobles nonsense wide open. Excellent

Not just a good tale... but a good tale told very well. It's nice when a brush with someone of AG's caliber is a happy one.

As for Barnes and Noble, I passed one the other day. There was a big poster in the window that said NOW STOCKING VINYL. For some reason this really pissed me off. They haven't sold music for many years, but now they have jumped on the bandwagon to make a quick buck. Meanwhile, the majors are reissuing everything... presumably for the likes of B&N, and the indies that never let the format die can't get their albums made because the lines are too long. I shook my fist at the store in a most defeated way. Then I had to explain to my nine year old why I made the gesture... and I actually tried. Poor kid. Father of the year I am not.

What a story! I don't what to say - you had a wonderful encounter with one of my heroes. Fabulous. I was all prepared then to be disappointed about Ginsberg selling out to 'the man' in Barnes and Noble and then the day was saved. You have something to treasure there, sir.

That's a great post and tale The Swede. Actually meeting Allen Ginsberg! I met Richard Hell at a book signing once and he was a bit of an arse (diappointingly)
Swiss Adam

Brilliant story... and brilliantly told. I love the wings - how inspired! That whole formal/don't speak/follow strict instructions signing business seems to defeat the object of it all completely, how cold and disconnected. I'm glad you experienced the opposite.

Brian. The Barnes & Noble at 22nd & 6th has long since closed down if it's any consolation.

Singing Bear. I've been sitting on this one for some time and then completely forgot to mention why I chose yesterday to share the tale - it would've been Ginsberg's 89th birthday.

Swiss Adam. I'm sure I've told the story before, but I've met Richard Hell too. It was back in 1978 or 79 when the Voidoids (& John Cooper Clarke) were supporting Elvis Costello. Me and a mate went to the soundcheck in the afternoon and ended up showing Hell the way back to his hotel via Ipswich town centre! We saw him again in the evening after the gig to get his autograph, but he'd already completely forgotten us by then! Imagine Richard Hell and John Cooper Clarke walking through Ipswich town centre - I'm sure some of the locals must have thought that aliens had landed.

Erik & C. I can kind of understand that there had to be some measure of organisation about the event, as there were some, ahem, far out characters knocking about who were trying to catch Ginsberg's attention. It was a bit OTT though. I wonder if my brief exchange broke the ice for those further down the queue.

Brian, do you think your daughter thought it a bit strange (even more strange than usual??) you shaking your fist at a shop window??
Swede, another fine story, I'm impressed you could hold a conversation rather than just mumble a few words.