It seems I struck a chord of recognition with a few blogging chums in my last post. Space - not just the final frontier, but also the arch enemy of the record and CD collector. I had a massive clear-out in 2011 prior to our move, but the quantity of physical product I own is still fairly substantial. About a year ago I bought a 6tb external hard-drive and started ripping all the CDs that were within easy reach and also moved a great deal of my downloaded music onto it from my laptop. Then the hard-drive crashed and I lost a ton of stuff. Until that point I'd had vague thoughts of getting rid of all the actual CDs, but losing so much so quickly, changed my mind. Hence my current attempt at reducing volume.

Here's how slim an unjewelcased CD in a cellobag is. 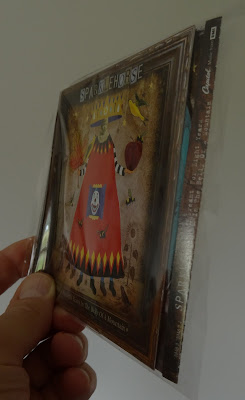 What I've done so far. A dozen boxes cut down to six. In alphabetical order, natch.

And this is how much more there is to do, another 25 or so boxes. 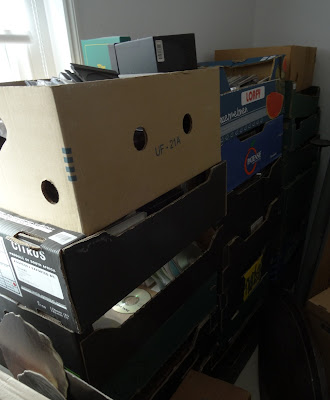 I'm listening to stuff as I go too. Wondering why I ever bought this, finding I own two copies of that and generally chipping away at the chaff. I'm also reacquainting myself with a few choice nuggets, some of which will find their way onto these pages in the coming months I've no doubt. I'll keep you posted on my progress.

Here's one such old favourite I rediscovered yesterday, French combo Hey Hey My My with the title track of their 2007 EP 'Too Much Space', a state of affairs we'll never suffer from here at Swede Towers.

That's a lot of work. Looking forward to what you discover in those boxes. 25 more? 25?? :) Where do you get the cellobags?

I know, ridiculous isn't it? The best cellobags I've found are from a company called Covers33, though they are quite expensive. There are usually a few companies selling them via eBay, I just go with whoever has the cheapest on offer that week.

Seeing those photos of boxes made my stomach drop. That's a big job. Like Singing Bear, I can't wait to see what you dig up. Thanks for illustrating a cellobag? I was a little lost after your previous post, but now I get it.

Be good to hear some stuff that you may not have heard for a while. All my CD's are in boxes, and have been for about 3 years, so will have to perform a similiar task at some point in the future.

The secret is back up. Or even backup to the cloud. You get 100gb with Surdoc free. I was bitten with the crash once andnow it is back up times back up. At the moment I only use Spotify unless I canot find somthing then I will by beg steal or borrow. You can't take it with you as they say. As I keep saying all I need is a Hard Drive.