Soak's show last week was a well deserved sell-out, following Bridie Monds-Watson & Co's Mercury Awards nod for début long player, 'Before We Forgot How to Dream'. The three piece line-up gave a strong, tight performance, enriched by sound quality as good as any I've ever heard at that particular venue. The set drew extensively from the LP, with the addition of one new number and a solo encore of Bonnie Raitt's 'I Can't Make You Love Me'. The highlight was an extended 'Oh Brother' that noisily pulled and stretched the song beyond all recognition. It'll be interesting to see if this is a direction she (and the band) will pursue in the future. 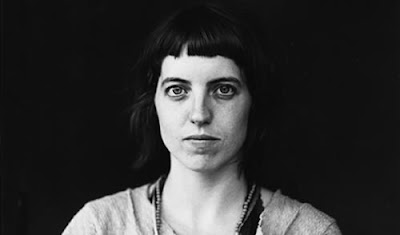 Good as Soak were, I was mainly there to see support act Rozi Plain, who, for various reasons, I've managed to miss on her previous visits to my neck of the woods. Her excellent third LP, 'Friend', released in the Summer, is one that I optimistically included in a pre-Mercury announcement punt a couple of weeks ago, though in the event, like a number of my other predictions, she was overlooked by the people who actually make these decisions. The album boasts a number of unobtrusive guests such as Alexis Taylor from Hot Chip, Serafina Steer and members of This is the Kit (of whom she is an occasional member) and François & The Atlas Mountains. On stage, as on record, Rozi is a sparse, restrained presence and her songs are wistful delights.

I was sure that you will enjoy SOAK live, Swede. I've seen her a few month ago on the festival I was at. And she was one of the great surprises in music this year. Hope she wins the Mercury prize. It's funny I've seen two more nominated artists on the festival Roísin Murphy and Ghostpoet. Rozi Plain is new to me but I will check it out.

Never listened to her before but on the strength of that I will need to investigate further.

The shows are coming fast and furious... you lucky bastard. I don't make it out much anymore. Hope it keeps you feeling young. I suspect after several late nights it would have the opposite effect on me. Liking this Rozi Plain.

Never heard her before, but will certainly be checking out some more of her stuff...

Retro check! These are great, too. 'Friend City' could easily be a This Is The Kit tune, mind, with the same vocal inflections. Who got there first?