Reissues Of The Year - Richard Dawson 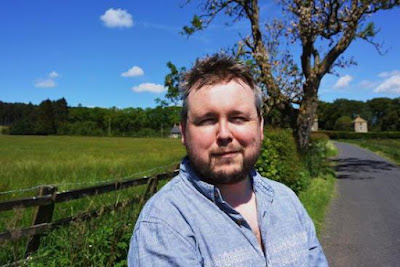 I have an ongoing and ever-growing list of artists who I'd quite like to see live. I also have a much shorter list of artists who I'm utterly desperate to see live. At the very top of this second list, surrounded by asterisks and underlined several times, are two words. Richard Dawson. I featured a handful of Richard's tunes in a post earlier in the year (here), a period when his profile was growing rapidly, but much of his back catalogue was nigh on impossible to track down. A couple of weeks ago, Weird World Records went some way to rectifying this deplorable state of affairs, when they reissued 2011's 'The Magic Bridge' and 2013's devilishly tricky to find, 'The Glass Trunk'. If you want to dip your toe, try 'The Magic Bridge', but both are just jawdroppingly great. With nothing more than his voice and a battered guitar, Richard Dawson can reduce you, sobbing, to your knees one minute and virtually pummel you into submission the next. It's extraordinary music made by an extraordinary man.

Here's 'Wooden Bag' from 'The Magic Bridge' and 'A Parents Address To His Firstborn Son On The Day Of His Birth' from 'The Glass Trunk'. I've also included an absorbing new 20 minute documentary, made during Richard's 2015 tour. Watch it and perhaps you'll appreciate why I'm so very anxious to see this man in concert.