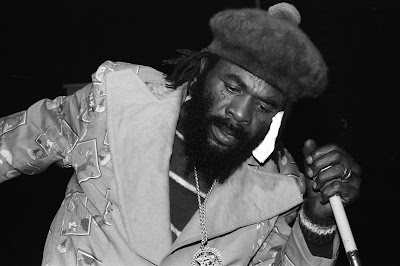 Thanks to a generous uploader, I managed to catch up up with the Don Letts autobiographical documentary, 'Dread Meets Punk Rockers' over the weekend. The film was originally broadcast in April on Sky Arts, but made a fleeting appearance on YouTube, before, unsurprisingly, being removed. Many of 'The Don's' stories of the Punk period may be familiar, though embellished by the copious Letts-shot film clips, took on much greater significance. Don and John Lydon smoking themselves into a stupor in Jamaica, an off duty Mick Jones looking a bit miserable at a party, Ari Up's unique and joyful dancing - and then there's the live footage. The Heartbreakers, The Damned, The Clash and, best of all in my opinion, a pair of sensational performances by Big Youth and Prince Far I. Is there more of this stuff Don? I'll get to Big Youth in due course, but for now, here's '354 Skank', a 1975 single from the mighty voice of thunder himself.

Fantastic stuff. I haven't got around to featuring Pince Far I yet, but he's on the list most definitely.

I can never get enough of that voice - it's right up there with Howlin' Wolf.