A Couple of Close Shaves

I've done some daft things in my time and here are two of them. The moustache years. What was I thinking? What was I thinking? Actually, I know exactly what I was thinking. Throughout my early teens I looked forward with excitement to the day when I would be 'grown-up enough' to have to start shaving, but, when the time came, I quickly became bored with it and, having no chin hair to speak of, swiftly sprouted a full and luxurious 'tache. Of course I should have just as swiftly hacked the damned thing off, but unfortunately it stayed - for way too long. I grew to hate it, but convinced myself that everyone would laugh if they were suddenly exposed to my bare upper lip. This was 1975-79. I attended my first Clash gig wearing a moustache for goodness sake! Eventually, one evening, I'd had enough and took a razor to the offending bristles. The following morning I steeled myself in preparation for the ridicule that would surely come my way when I reached work. No-one batted an eyelid. Not one bloody comment! I didn't know whether to laugh or cry.

In subsequent years I've flirted with various facial hair permutations, from goatee to soul patch, but never again the solo 'tache. Every Movember I consider joining the terrifically worthwhile charitable fray, but wind up donating my way out of actually participating. Who knows though, perhaps a moustache would suit me more, now that I'm in my dotage? Maybe this year I'll summon up the courage to be among those receiving the donations, as well as giving them come Movember, as I dazzle one and all with a dashing handlebar, chevron or walrus! 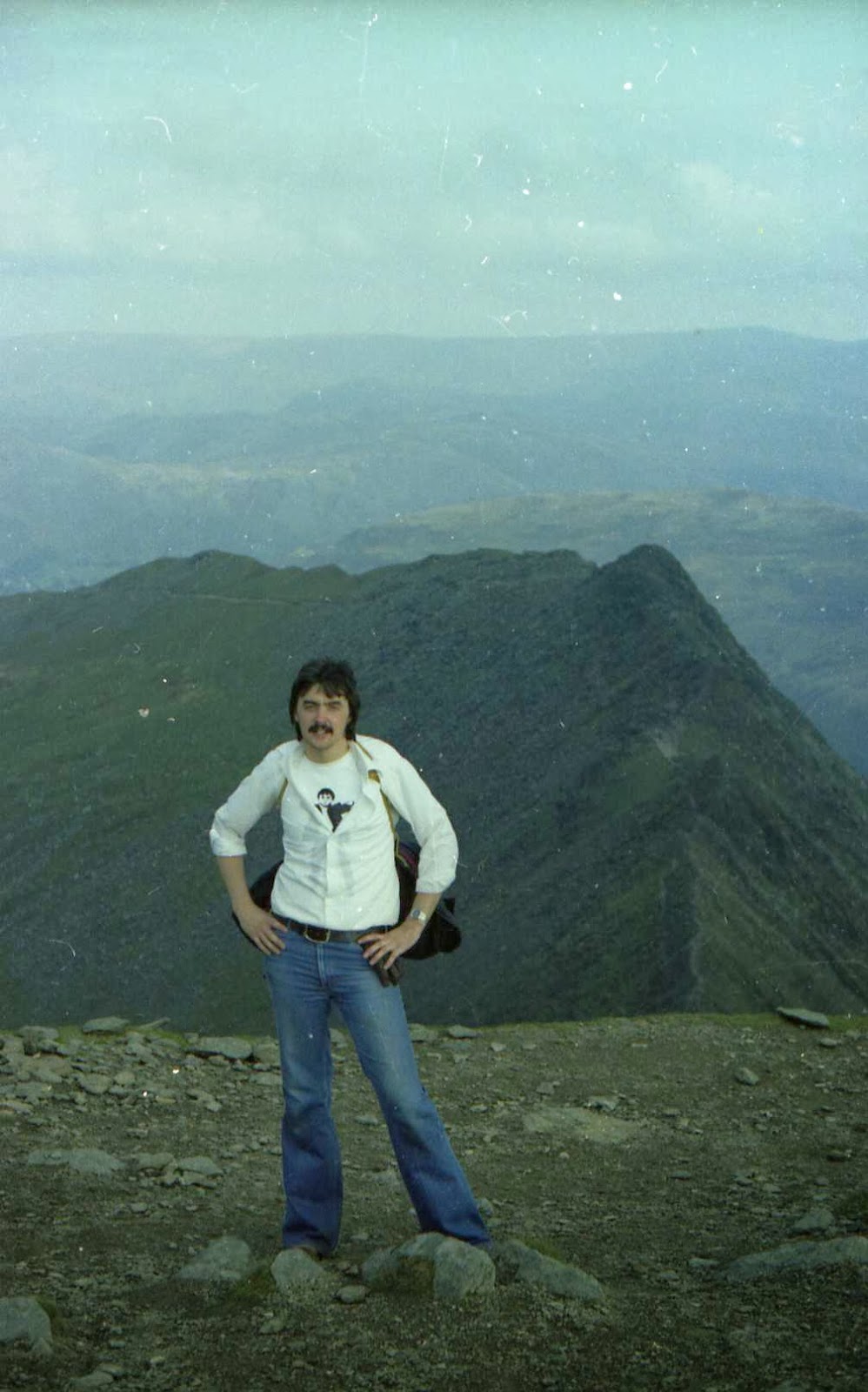 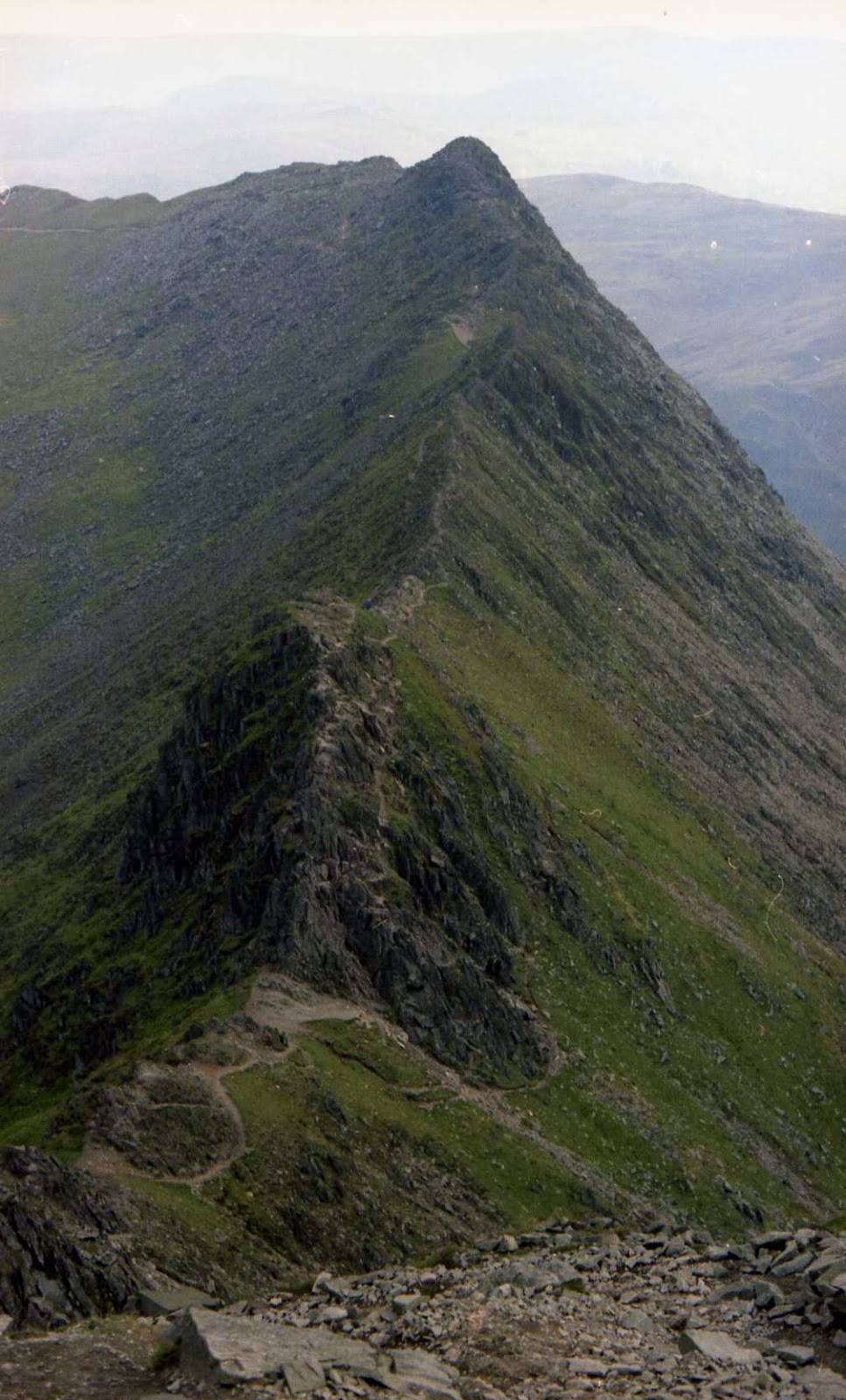 The other daft thing I was going to mention? In 1977, aged 17, I went on holiday to the Lake District with three mates (all equally 'tached up as it happens). While there, we climbed Helvellyn, the third highest mountain in England. Impressive? Well, looking back, I was remarkably fortunate to have made it up and down unscathed. My chums were fully kitted out in walking boots and all-weather gear, while I made the climb in shirt, jeans (flares!) and regular street shoes, not forgetting an Iggy Pop t-shirt for extra warmth! It's not Everest, but people die attempting to scale Helvellyn and I was insanely ill-prepared for such a trek. By the time we made the final scrabble from Striding Edge to the summit, the backs of my heels were cut to ribbons and bleeding profusely. The views from the top were spectacular, temporarily numbing the pain, but it took us a further three hours to get back down and, in fading light, locate the car. I couldn't walk properly for days.

Handlebar...go with the handlebar for those of us who are married to women that would murder us in our sleep if we left the house with waxed whiskers.

It's amazing that any of us, especially those of us with testicles, to the age of 20.

Hee hee! Thank you for putting us out of our misery having teased us previously with mentions of mystery moustaches! The thing is - it suits you! Especially with the mountain backdrop, very Crosby Stills & Nash. And I do remember a few moustaches in early punk days, there was that odd transitionary period, so we'll forgive you ;-) (My discovery that Oop North hardcore punks were still sporting moustaches in 1981 was more surprising...)

We live and learn re. both feet and facial hair (not that I've done facial hair).

I'm with Erik - if you're gonna grow one, grow a big one! (Just for Movember, of course)

A 'tache for The Clash! That is awesome! Like C, I can recall that odd period where you'd see not only hirsute faces but flares and cheese-cloth shirts (maybe even clogs!) at early punk gigs. You are forgiven. Great pic, by the way. I've never had a moustache myself but did sport a rather strange looking goatee when I was about 19. Laziness will sometimes lead me to overgrown stubble but every other time I have threatened to go the whole hog with full beard Mrs. B puts me right with a withering look.

As for your exploits on Helvellyn, it reminds me of a similar experience i once had on Glydyr Fawr in North Wales. There we were in our everyday street clothing, the mist closing in at the top, when we were passed by an RAF climbing team in full mountaineering gear. They looked at us pitifully and probably logged us as a rescue mission for later that day. We also lost the way down and ended up scrambling hundreds of feet down a scree slope. Incredibly, we reached the bottom unscathed. People can be such idiots. Great post.

Great Pics TS...Flycasual has done that tache thing a couple of yesrs..
I have done a few cringe things in the past....I will save it for a future post...I come out in a cold sweat when I think about it..i like that music piece by the way.

C. I suppose the 'tache suited my long hair and flares to an extent, but the problem was that as I got more into the burgeoning punk scene the hair got shorter, the trouser legs got straighter...but the 'tache remained! You're dead right though, there was a crossover period and I wasn't alone with my top lip hair at that Clash gig.

SB. A 'tache for The Clash! That should've been the title of the post - brilliant! I won't go into detail about the shirt I wore to my first Clash gig, but suffice it to say, when I dispatched it to the charity shop pile not long after, Mum pulled it out and continued to wear it as a blouse for many more years. D'oh!

Old Pa. The things we do, the things we do! I look forward to reading about a few of your cringeworthy moments in the future and I'm sure I'll have more of my own to share in due course. Glad you enjoyed the tune.