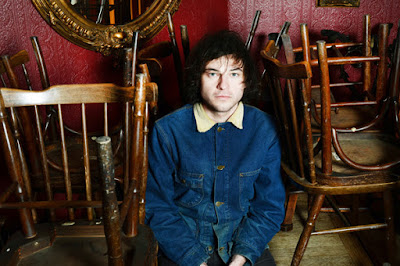 Almost exactly 12 months on from his first visit, Ryley Walker last night returned to the Norwich Arts Centre to promote his imminent third LP, 'Golden Sings That Have Been Sung'. As with last year's concert, the recorded versions of his songs serve as mere sketches for Ryley, and his two superb backing musicians, to build on - adding instrumental flourishes, extended breaks and virtual raga-esque passages that completely transfix the partisan audience. Walker's affable onstage demeanour is in stark contrast with the absolute intensity of his performance - how many other musicians invite their entire audience over to the pub for a drink after the show? Come to think of it, how many other performers give out their home address from the stage, offering a place to crash if any of us are ever in Chicago? I scribbled it down, just in case.


Talking of scribbling down, grab a pen and paper and make a note of this name - Holly Macve, Ryley Walker's support act last night. She's young, English and signed to Bella Union, though she sounds for all the world like cross between Patsy Cline and Paula Frazer. Quite incredible. The songs are as strong as the voice, but there's no album just yet. Definitely one to watch out for. 'Corner Of My Mind' is the first taste of what's to come.

HollY's name duly scribbled down!
Very good - a touch of the Paula Frazer's as you say

The folks at Bella Union have always had good ears. Sounds like they have mined another gem. Your description really made me wish I could have been there. Through the years so many great acts have passed through the Norwich Arts Centre. From thousands of miles away I have built up this place in my mind to ridiculous proportions.

TS bit of coincedence Roundabout is my track of the week. When he asked everybody to the pub was he buying or did he free load. Good move. That address is a doss house by the way. Sorry I shud not be so Cynical.He seems like a nice fellow.

I'm about to play this Holly Macve track. Mentioning her in the same breath as Patsy CLine and Paula Frazer leads to expect great things!!!!!!!
That Riley Walker song is excellent.

Holly Macve must surely have in her collection that first Tarnation album. Brilliant.
Looks like Ryley Walker has an album out on August 19

Brian - The Arts Centre is a great little venue. I've lost count of the great performances I've witnessed within those walls over the past 25 years. I'll dedicate a post to the place one of these days.

Old Pa. The first round was on Ryley!