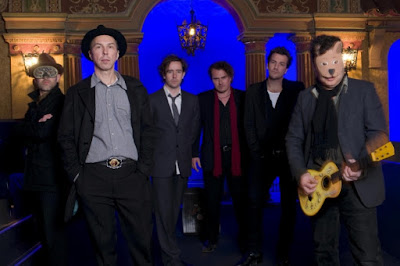 The Blackeyed Susans draw from the fertile pool of talented Australian players, featuring a floating line-up that has included members who have also served time with The Bad Seeds, The Triffids, Ed Kuepper, The Dirty Three and The Surrealists. The origins of the band stretch back as far as 1989 and they still play shows today, though have released no new music since 2003's 'Shangri-La'. In 2001 The Blackeyed Susans issued 'Dedicated to the Ones We Love', an album of covers. Much of the source material for the project was unsurprising - Big Star, Velvet Underground, Bob Dylan, Elvis Presley etc - while other selections were less predictable. Take Mark Knopfler's 'Private Dancer' for instance. A hit for Tina Turner in 1984 and here given an effective New Orleans jazz funeral style arrangement.

It's so interesting how another take on a song can make it not only sound, but also feel, completely different. Although, I still can't ever hear this song without being transported back to the other side of a record shop counter, standing there dishing out cheap pressings of the Private Dancer album and tape by the dozen!

I could've sworn it was Matt Dusk.

C. That memory rings a bell with me too!

John. Not a name I'm familiar with. I'll check with Mr Google.

What a great version enough to get me to search out the album.