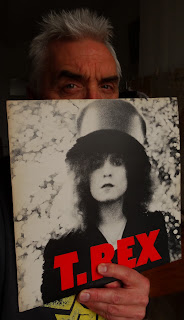 There had been singles, lots of them, but until then, any LPs that came my way were borrowed ones, hastily taped on my portable cassette player via a handheld mic, before being returned to their rightful owner at school the following day. On July 21st 1972, 45 years ago today, 'The Slider' by T.Rex was released. Three weeks later I bought a copy of the LP while on holiday in Dorset - I was 12 years old. Many hundreds of LP's have passed into and out of my hands since then, but that very first one is still with me - and shall forever be. It all started here.

In the Summer of 2015, I had the great good fortune to meet Tony Visconti, the producer of 'The Slider' (not to mention several other cornerstones of my record collection). I stuck out my hand, gripped his, shook it warmly and said 'Thank you',  twice. 'What for?' he asked, smiling broadly. 'Everything', I said.

My sister, three years your senior, played Electric Warrior until the grooves were flat. I believe she still has the album, today.

Charity Chic. Perhaps I was a little conservative.

Martin. I still have my original copy of 'Tanx' too, but 'Electric Warrior' is my second copy.

I'm with CC - must be in the thousands, surely!
All these year markers are quite staggering and scary, but there's great comfort to be had in knowing we're all still around, still feeling the same way and still talking about the music that shaped us...

I love your site, you know I do, but seeing posts like today's scares the crap out of me. Mine often do too, and I'm at the wheel!

I think it's why I stopped buying all the heritage mags (Q, Mojo, Uncut etc.). The records we bought as kids are now nothing more than trading cards on the Antiques Roadshow. Am I making sense here? Probably not. When Alyson comes back I'd love to get her take on all this - she specifically wanted to concentrate on this particular part of our old lives - whereas you, TS, have more of a foothold in the here and now. Sorry for bringing the mood down, and I was a Bolan fan too.

Ramble over, this is a topic for offline with a whisky, an open fire and a sympathetic ear! J

I always enjoy our first album stories. This is certainly one to be proud of.

Not a bad one to start into music. I still remember this album (even it wasn't my first) very well. Good that we all remember our first records. That makes me smile and knowing that I am not alone.

John. It is scary stuff - particularly scary in that I can remember the smallest details of all those early record purchases over 45 years ago (which shop, who I was with etc), but struggle to remember what I had for dinner yesterday. Mine's a bourbon by the way.

Excellent post. Happy 45th anniversary of your coming of age. (I won't be doing a similar post holding up The Return of Bruno anytime soon.)

Well that certainly is a scary number but as John says you have a great foothold in the here and now as well which is remarkable - My here and now ended about 10 year ago I think. Don't know if you noticed but one of the magazine pics I posted today featured Mr Bolan - I have a whole archive box full of old musical memorablia just waiting to be shared - I'll make sure to include some Bolan for your good self.