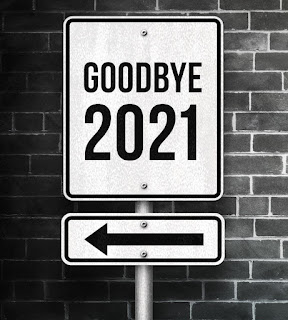 In mid-November, right at the point where the busyness level at work changed gear from simply hectic to full-on pre-Christmas panic, I started to feel a bit under the weather. Not Covid under the weather, but unusually fatigued and retreating to bed at 6 in the evening under the weather. I couldn't fathom it and soldiered on feeling grotty for four weeks until one evening when I removed my shirt and it all became clear. A vivid rash had appeared across my chest, which by the following morning snuck under my armpit and around onto my back - shingles. With the rash came searing pain to add to the fatigue. My doctor prescribed a course of 5 huge tablets a day on top of the regular painkillers I was consuming every four hours just to obtain some level of comfort. The long and the short of it is that I've been off work now for by far the longest period since catching mumps from a record shop customer in 1980! I'm well on the mend though and only mention all this to explain the tumbleweed that's been blowing around the corridors of this blog for some time. I return with a brief look at some of the music that has kept me going throughout 2021. Links to further information/listening in red.

A monthly EP project, which picked up where the 2020 album of the same name left off. A total of 48 tracks written, recorded and released across the past 12 months, featuring words and music inspired by feral animal sounds, ancient stories and personal folklore. I'm already dreading the empty space where an EP should be come the end of January.

The second LP of avant-mutant-disco from Glasgow's AMOR (this time made in conjunction with Norway's LEMUR) appeared way back in January. Since then Richard Youngs has released his usual steady stream of  solo records throughout the year. I've managed to pick up up about half a dozen of them, but I'm sure I've missed many more.

In February Kungens Män put out a limited edition box set ('Innanför Boxen') containing four LPs previously only available digitally plus 'Den Nya Skivan', which helpfully translates as 'The New Record'. Providing we're all still here to tell the tale, the band are due back for some UK dates in April. Go see them, they will change your life.

As many of my oft-postponed concerts of the past 18 months finally started taking place this year, I found myself picking and choosing what to actually attend, passing on several and masking up for just a precious few. One of the essential shows was by the phenomenal Richard Dawson. There really is no-one like him on stage or on record and his recent collaboration with the Finnish group Circle sits easily amongst the best things I've heard in 2021.

With every successive release, Jack Cooper sheds a little more of his previous musical skins and now 'Island of Noise' finds almost all traces of Mazes and Ultimate Painting erased. A completely analogue project, 'Island of Noise' was record onto 2" tape, is available only on vinyl and is housed within a box with an accompanying booklet all of which were manufactured using recycled and sustainable materials. Admirable though these details are, they'd mean little if the music itself wasn't so rich and rewarding.

An absolutely majestic debut duo album from Christina and Alex, who also play in a trio with steel guitarist Noel Dashwood. 'Hunter' is only the first of two lockdown projects from Alden & Patterson to arrive, the second, their first child, is due in February.

National Information Society - Descension (Out of  Our Constrictions)

This brief overview of standout records released over the past twelve months is not in any order of personal preference, though if I had decided to reveal its contents in a TOTP chart countdown format, 'Descension (Out of  Our Constrictions)' would unquestionably be my No.1 album. Recorded live, it's a single, hypnotic, 75 minute piece, spread across four sides of vinyl. Genre defying.

I'll leave you with Beak's wonderfully sinister festive offering from back in 2017, 'Merry Xmas (Face the Future)'. Compliments of the season everyone - here's to better times ahead.