Early last year, while looking for a way to increase my exercise and also see a bit more of the countryside, I realised that I could, if I wished, pick up the train, travel one stop, then walk the ten miles back home along the river that flows a few hundred yards from our back door. With a packed lunch and a flask of coffee it would be the perfect jaunt. I began taking longer local walks to build myself up for the task. Then I had my thunderclap headache incident, which knocked me sideways for a while. A little later I did something nasty to a ligament in my knee and suddenly the year was gone.

This year I've been thoroughly enjoying discovering new routes along the lanes, bridleways and public right of ways that criss-cross the countryside around our village and once again I've been steadily building myself up for that scenic ten mile riverside walk home. Ten days ago the inevitable happened. The day after my birthday we went out for another pre-lunch circular walk in an area we had high hopes for, but actually turned out a bit of a disappointment in terms of location and scenery. Also, after about a mile, I managed to twist my ankle, something I did with painless regularity as a kid. Unfortunately, the additional years on the clock and pounds round the waist ensured that this time it was anything but painless and it made an odd grinding, cracking noise when it happened, just to hammer home the point. In spite of the discomfort, the ankle didn't swell immediately, but a couple of days later it really puffed up and has been swollen and painful ever since. It's only a sprain, so it's not the end of the world, just a bit frustrating, but once again my very modest perambulation plans are, for the time being, on hold.

Here's an appropriately titled tune by the extraordinary Willie Dixon.

Pastiche, homage or parody? Los Angeles based duo, The Smoking Trees, walk a fine line between the three at several points on 'Acetates', their new album, which is available to check out in full here. A handful of the tracks unarguably provide sublime psych-pop moments though. Take 'Persuaded Rendezvous' for example. It's spellbinding stuff, despite the fact that I'm half-expecting a muted cover of 'Rain' everytime I hear that intro.

As each successive Record Store Day becomes more popular than the last, I find myself, once a year, in the odd position of having the shops I worked in so many years ago (my own and that of a small chain), occasionally mentioned in passing on the radio or online, indeed both got a nod on Steve Lamacq's show this week. I still remember many of the long gone locations where I made my all-important early vinyl purchases in the 1970's and it's quite touching that I, and my fellow former retailers in sound, are sometimes remembered with similar affection.

I can't make it to a shop to celebrate this year's Record Store Day, so I've been having a rummage through what's left of my own, once large, record collection to mark the day with a couple of fine slabs of vinyl from the Swede archives.


'No Time For Talk' is the first track from a 1983 5 song 12" EP by The Box, an off-shoot of Clock DVA. Tremendously angular stuff. I was so blown away with this EP on release that I actually wrote to the band, in a state of high excitement, singing their praises. To my surprise they sent me a long handwritten letter back, even inviting me to introduce myself if I ever made it to one of their shows, which I unfortunately never did manage to do.


'Love' by Orchestre Jazira just turned up in a new release box one day in 1984 and after a single play I knew I had to have it. The record has been with me ever since and the two tracks on the 12" remain the only ones I've heard by the band. 'Love' is a fabulously infectious tune that comes in at just over 6 minutes, but wouldn't overstay it's welcome if it was double that length.

To those of you who will be up and about early to join the queues - happy hunting. But please remember, a record store is for life, not just for record store day.
Posted by The Swede at 00:58 4 comments:

From Deer to Deerhunter

To ensure a healthy appetite for my birthday pub lunch yesterday, Mrs S and I first took a long walk on a wild and windy stretch of coastal heath, where the birdlife was plentiful, if sometimes a little distant. Not distant in any way, however, were these deer. As we passed a thicket of gorse bushes there they were, not ten feet away, looking straight at us. When I'm out walking locally, in a quiet lane or by the river, I occasionally spook a little fawn, which will run like the wind into the distance. Not these guys though. We were on their manor and they stood their ground and stared us out, as if daring us to blink first. I very gently took a couple of shots and then we moved on and left the beautiful creatures to graze in peace. 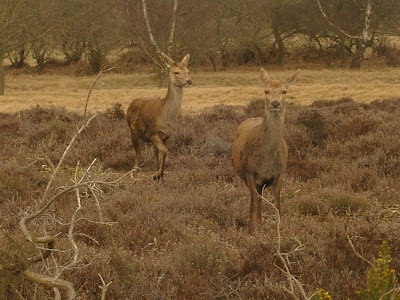 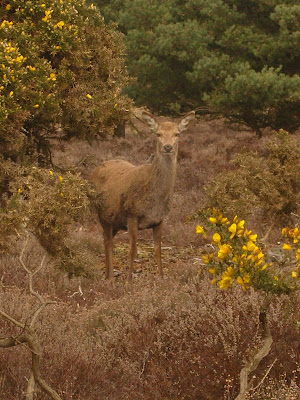 It's a tenuous link I know, but I'm nevertheless excited to learn that Deerhunter have a new LP, 'Monomania', due for release in a couple of weeks time. The album is the follow up to 2010's brilliant 'Halcyon Digest', which featured one of the very best tracks of that year, 'He Would Have Laughed'.

In addition to the family tradition of the radiogram photo, every year on my birthday Dad did his best to capture my puffed cheeks as I blew out the candles on my cake, usually at a little party with friends or relatives. Here are two examples from the archives. 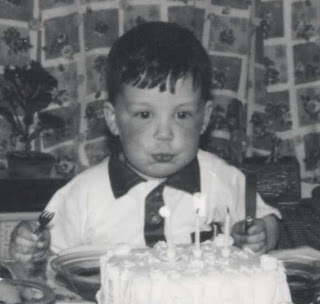 In 1963 I don't look 100% sure of what I'm supposed to be doing, although I clearly know that there is more food involved, judging by my tight grip on the cutlery. 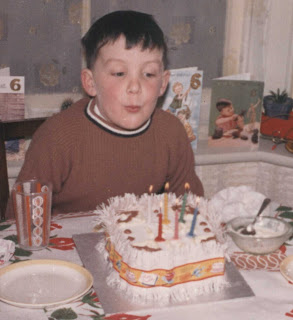 By 1966, however, I'm an old hand at this candle blowing malarkey, demonstrating a polished technique and solid embouchure.

I won't be blowing any candles out today - it becomes too much of a fire risk after a certain age. Instead Mrs S & I will be celebrating my 53rd with a day at the coast, incorporating a pub lunch and leisurely walk.

Here's an audience recording of an appropriately titled traditional tune, dating back to the 17th century, from Nancy Wallace & Jason Steel. I was at this show in 2009 and regretfully it remains the only time I've seen either artist in concert. Nancy is surely long overdue for a new album, her solo debut, 'Old Stories', is a hugely recommended favourite of mine.

After a lengthy absence and without fuss or fanfare, Mick Jones and Tony James return, in their Carbon/Silicon guise, with a gentle, understated new song, 'Big Surprise', which is accompanied by a simple, but classy video, filmed on the cold streets of West London.