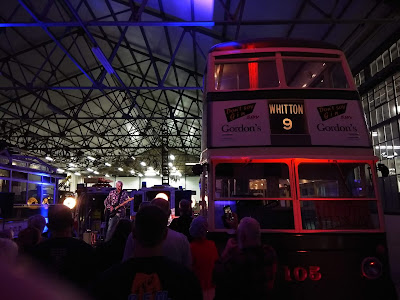 Robyn Hitchcock on stage at the Ipswich Transport Museum

Over the past 18 months I've tuned in to over half of Robyn Hitchcock & Emma Swift's twice weekly Sweet Home Quarantine live streamed shows - that's about 90 hours of music all told. Us regulars in the audience have become collectively known as The Groovers to Robyn, Emma and each other - a band of brothers, sisters, friends and strangers, spread around the four corners of the Earth, tuning in to forget about our problems for an hour or so, be they personal, political, local or global. While the outside world was steadily going to hell in an ongoing series of handcarts, on Sweet Home Quarantine nothing was off limits - Soft Boys classics, back catalogue gems, deep obscurities, newly penned songs and cover versions galore were joyfully delivered from their laptop to ours, all interspersed with warm conversation and regular appearances from adorable Scottish Folds, Ringo and Tubby. And apparently the show will go on. Even as we tentatively tiptoe back towards some form of 'normality', Robyn and Emma have expressed a desire to maintain the community and continue to broadcast Sweet Home Quarantine shows into the future, as and when real life commitments allow.

The real life commitment currently causing a hiatus in Sweet Home Quarantine shows is Robyn's much delayed UK tour. Last Saturday I was at the Ipswich Transport Museum to witness him play a wonderful set on a stage laid out between a tram and a trolley-bus. One of Robyn's life long passions is ancient, redundant modes of  public transportation, as can be witnessed in the lyrics of several of his songs and he seemed genuinely overwhelmed by his surroundings, claiming it to be the most perfect venue he'd played in 45 years on the road. The setlist reflected the transportation vibe - 'Fifty Two Stations', 'I Often Dream of Trains' and a really beautiful 'Trams of Old London' were all given outings. Most poignant of the lot though was 'Raymond and the Wires', the story of a 1964 trolley-bus trip young Master Hitchcock took with his father (the author Raymond Hitchcock). Robyn sang the opening line '...my eyes have seen the trolley-bus...' and paused, gently strumming his guitar as he looked left and right at the ancient vehicles all around him - an emotional moment at the beginning of a particularly personal song.

Robyn Hitchcock - Raymond and the Wires 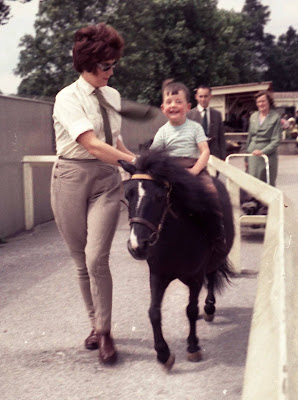 I have no idea how my parents persuaded me to sit on this little horse, let alone ride it, so timid was I at three years of age. I appear to be having fun nevertheless. The year is 1963. The venue? Possibly London Zoo, but that's just a guess. How cool is the lady guiding the horse though? I like to imagine her nipping off to meet friends at the 2i's in Soho after work, for an evening of fab tunes and frothy coffee.
Here's a really fab tune, albeit from the early 1970s rather than the early 1960s. The LP 'Dedicated to You, But You Weren't Listening' by The Keith Tippett Group was originally issued on the legendary Vertigo swirl label in 1971. A copy in decent condition will now set you back an eyewatering sum, should you be lucky enough to find one. Even reissues from 2012 are changing hands for £50 plus, so I'll have to stick with the CD for now.
The Keith Tippett Group - Black Horse
Posted by The Swede at 07:00 6 comments: