Last Night I Said Goodbye to My Friend

These days most bands reform eventually, to some extent or other, and by the time they do, it's old news thanks to social media. In 1993, when word spread that the Velvet Underground were reuniting for a European tour, it was a huge surprise. Two shows were scheduled for London, one at Wembley Arena, the other at The Forum in Kentish Town. It would have made sense to apply for Wembley tickets, with much more chance of being successful, but somehow the thought of VU in a barn didn't sit right with me, so I gambled on the smaller venue, sent off my cheque and stamped addressed envelope, sat back and waited. The gamble paid off. 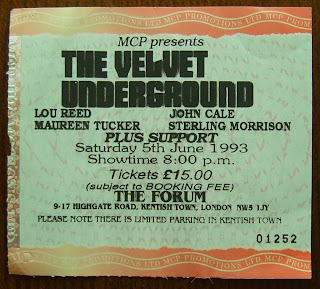 It was a privilege to be in such a small room with The Velvet Underground during that brief reformation and witness, at close quarters, the glances, nods and smiles between band members as they rediscovered and rekindled their magic in front of us. The songs seemed frail, almost stapled and gaffa-taped together in places, by turns brutally primitive and utterly transfixing. When it came to the encore, we all howled.

As a postscript, here is the very last performance by The Velvet Underground. A song of farewell to their fallen comrade Sterling Morrison, filmed at the band's Rock'n'Roll Hall of Fame induction in 1996. Watch out for the glances, nods and smiles.

Two years after the fabulous 'Gentle Spirit' comes Jonathan Wilson's new LP, 'Fanfare', featuring contributions from Jackson Browne, Graham Nash, David Crosby, Roy Harper and Gary Louris of The Jayhawks. Wilson is a respected producer, with, personal favourite, Father John Misty's 'Fear Fun' among his credits. 'Fanfare' is, in it's own way, as quietly diverse as that LP, basking in the golden glow of the Laurel Canyon one minute, before heading off into prog-lite noodlings, folky flourishes or gentle funk workouts the next. 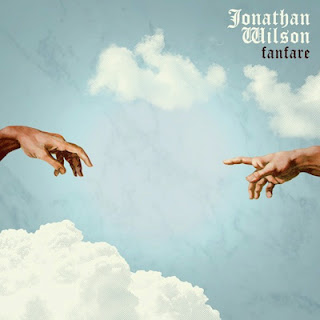 In common with so many of my favourite efforts of 2013, 'Fanfare' is, unapologetically, an 'album' - best enjoyed when listened to from start to finish. Here though, by way of a taster, is 'Dear Friend'.

Since we're on a Morrissey tip, here's Malaysian singer, songwriter and ukulele player Zee Avi's divine interpretation of 'The First of the Gang to Die'. This tune cropped up on one of the, otherwise interminable, background muzak compilations that we were obliged to play on permanent rotation at the coffee shop in which I worked. The discs, though regularly updated, consisted of 99% dismal aural wallpaper, with just a very occasional gem randomly dropped into the mix. It was little moments of pop delight such as this that got me through the day.

If you must write prose and poems the words you use should be your own...

It was once such a regular activity, to leave the house, go to a record shop and buy a new single or album on the morning of release - I must have done it a hundred times, if not more. Today though, I did something I've rarely done before - I purchased a book on the actual day of publication. After catching a breathy review of Morrissey's 'Autobiography' on the radio over breakfast, I made a mental note to look out for it in town later on, while in reality doubting that I'd actually be able to find a copy locally. WH Smith didn't make it easy either. I'd all but given up the search when I found a small pile of them at the very back of the shop in a small alcove near the Post Office, on the floor, literally. 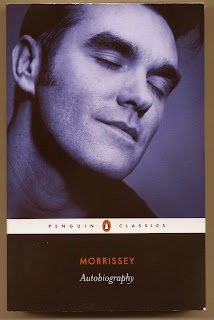 So now I pause awhile in my quest to re-read all of Kinky Friedman's books before the year is out, in order to take a gander at what young Steven Patrick has to say for himself. Initial observations? No chapters or index pages and an opening paragraph that spreads itself over 4½ sides. So far so good. 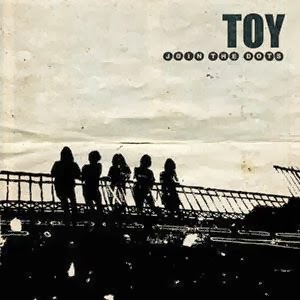 Here's the title track from Toy's forthcoming second LP, 'Join the Dots', due for release in December, a swift follow up to the band's 2012 self-titled debut. I've featured these guys on two previous occasions (here and here) and this stonking new tune is every bit as good as what's come before.

Form an orderly queue! This is recent bounty from the allotment, currently sitting on the window sill until it's ready to be transformed, magically, into spicy, hearty soup by Mrs S. The allotment produced many a mouthwatering treat this year, in spite of the best efforts of the local rabbit population. We're in the process of erecting a fence around our plot, which will hopefully keep the blighters at bay. Next year we might need a bigger window sill.

Here, from 1979, is one of the very last great tunes to emerge from The Black Ark Studio. Produced by Lee Perry, it's Leroy Sibbles talking about the 'Garden of Life'.

Previously on Saturday Scratch.
Posted by The Swede at 11:34 3 comments:

For a few precious months in 1967, the mean streets of Walthamstow were made safe by a mysterious masked superhero, wearing a hood, cape and, erm, sandals. He didn't shelter in a Batcave. He didn't need a Batmobile. He had no use for a Utility Belt. For he had in his possession a weapon that made the criminal fraternity of the day quake in their boots. He had one of his Mum's wooden coat-hangers with the metal hook taken out.

Here's some thrilling audience footage from a gig by Elvis Costello & the Roots in Brooklyn a couple of weeks ago. The one-off show was to launch the new LP, 'Wise Up Ghost', but, in addition to album tracks and old favourites, Elvis and the band found time for a couple of choice covers, The Specials' 'Ghost Town' (wittily re-titled 'Wise Up Ghost Town' for the evening) and this, John Lennon's 'I Found Out'.


'Wise Up Ghost', incidentally, is one of the surprises of the year for me. An inspired collaboration and a very fine LP indeed. Check it out here.
Posted by The Swede at 08:41 2 comments:

Today we took ourselves off to Southwold for a refreshing blast of sea air, a chippy lunch and a pint of Adnams, beer of the Gods. As I wandered back from the bar after ordering the aforementioned feast, I had the sudden sensation of having been poked in the eye, even though I hadn't - a very odd feeling. When I reached our table Mrs S's expression spoke volumes. A vessel must have popped and the white of my right eye was already becoming blood red and fairly unpleasant to look at. 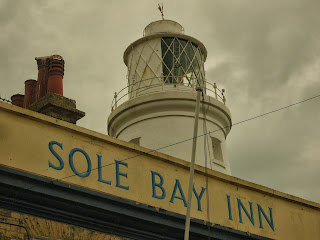 There is little better, after such a fine lunch, than an invigorating walk along an out-of-season beach, when the wind is howling and the waves are crashing into shore a few feet away. Bracing is the word and it really does remind you that you're alive, even if you are wearing sunglasses to hide an unsightly, bloody eye.