While flicking through a scruffy cardboard box of old 7" singles, on a junk stall on Walthamstow Market, one Saturday morning in early 1973, my fingers alighted on a picture sleeve for 'Desdemona' by John's Children. I was nearly 13 years of age and knew that before T.Rex there had been Tyrannosaurus Rex, whose albums I had recently discovered via the 'Toofa' double LPs released by Fly. I also knew, somewhat vaguely, that before Tyrannosaurus Rex Marc Bolan had briefly been a member of a group called John's Children and made a single with them, but that was back in 1967, nearly half my lifetime ago. I'd certainly heard no music by John's Children and had seen only one photograph of the band, which, luckily, was the very one used on the picture sleeve in front of me. If it hadn't been for that particular shot, I might well have flicked right on by to the back of the box, none the wiser. 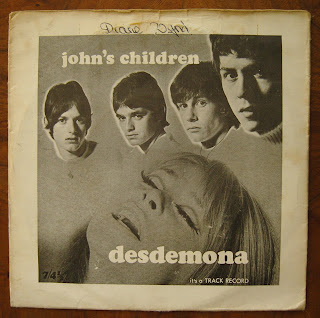 Diane Wynd, wherever you are, thank you.

So I was aware that this was a potential rare gem, but convinced that when I pulled the record from the sleeve, I would find either a copy of 'Desdemona' so damaged as to be unplayable or, even worse, a Frank Ifield single in the wrong cover. In the event, the sleeve contained a near pristine copy of 'Desdemona'. With uncharacteristic maturity, I tried to control my breathing and told myself not to become over-excited, as I swallowed hard and asked the price. The man in the cap who ran the stall took a drag from his cigarette, sucked his teeth, thought for a second and said - '10p'. That was the hardest moment of all, I stifled a yelp of delight. He didn't realise the significance of the record! Hands shaking, I gave him the coin, he dropped the single into a brown paper bag and I was off home, heart beating fast and sweat trickling down my back.

Back in my room I fired up my trusty Fidelity HF43 mono record player and listened to 'Desdemona' a couple of times. It was impossibly thrilling to hear Marc's voice, instantly recognisable, as he echoed the title refrain. Then, needless to say, I phoned all my friends to gloat about my good fortune. Everyone was at my place within the hour and it was orange squash and jaffa cakes all round as we played the single several times over to let it all sink in and make all-important attempts at transcribing the lyrics. Then we played the b-side. If we'd considered 'Desdemona' to be somewhat raw and primitive, compared to the lush Tony Visconti T.Rex productions our ears were attuned to, the opening few seconds of 'Remember Thomas à Becket' completely blew our young minds. 40 years on from that first play, it still sounds pretty far-out to me.


'Remember Thomas à Becket' features no Marc Bolan involvement - that's his predecessor in John's Children, Geoff McClelland, on guitar. The song was re-written and re-recorded later in 1967, emerging as a slightly more trippy, less freaky A-side, with the flowered-up title, 'Come and Play With Me in the Garden'. 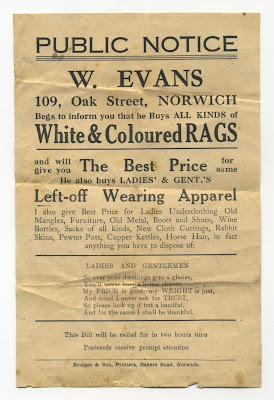 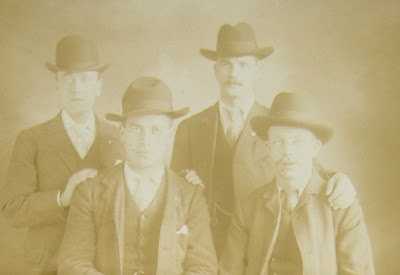 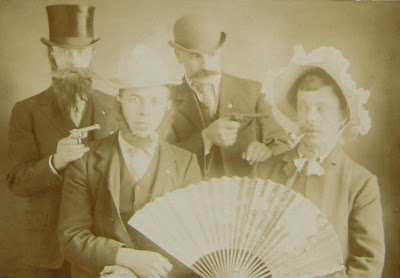 Yesterday was another of those heavy, sultry, humid days, resulting, late in the evening, in a Hammer Horror style mist on the marsh. Difficult to capture on film, but a wonder to behold. 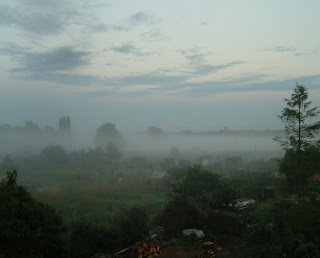 This morning - rain! Lashing down and hopefully clearing the air a little. To celebrate, here's Buddy Raphael's 'The Rain Come' from 1975, recorded at the Black Ark, with Tesfa McDonald sitting in Scratch's producer's chair, and released on McDonald's own Tesfa label.

Previously on Saturday Scratch
Posted by The Swede at 08:41 4 comments:

Should It Stay or Should It Go?

There's been some discussion of late, among the folks who gather at the old watering hole, concerning how we buy, store and even listen to music in 2013. We each have our own problems, solutions and suggestions in this regard, but the common thread that binds us is that we are all in it for the long haul. By whatever means necessary, we'll be grooving to our favourites and digging the new, until we drop.

My primary issue is one of space. I've no doubt that if I had the funds and enough square footage, I would have a music collection of John Peel proportions. In the real world, however, we have a front room that I have to occasionally remind myself actually is a room, so crammed is it with boxes of books, CD's, records and sundry other stuff accumulated along life's highway. It needs addressing, both to reclaim the room and to be able to unbox and enjoy the stuff we do have. To that end, I've purchased a 4tb external hard-drive and begun wading through CD's, ripping as I go. It's a bittersweet experience I can tell you, as nearly every one of them is a memory of some kind. My aim is to get the physical collection down to a manageable level while backing-up and dispatching what's not essential, though, as we all know, what might appear non-essential today may well be life-affirming tomorrow. 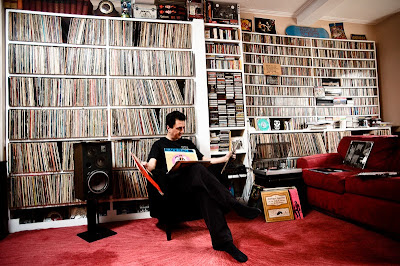 In my dreams....minus the carpet

On the subject of life-affirming, I had long ago discounted a purchase of the forthcoming Clash box-set on the grounds that a) it isn't as comprehensive as it could be, b) I have all the music on it (sometimes in multiple copies), c) the expense and d) the dimensions! It would take up a ton of potential shelf-space that I'm trying to free-up. I was pleased with my resolve and proud of my self-restraint. Then, a few days ago, the following footage appeared online.


Familiar stuff to the average Clash fan, but in drastically better quality than has previously been available. As I watched this glorious performance, two of the four songs played by the band on the US TV show 'Fridays' in April 1980, my resolve melted, my self-restraint ebbed away and I slipped, tripped and fell in love all over again. I ordered the box-set. Something slightly less life-affirming will have to go to make way for it. 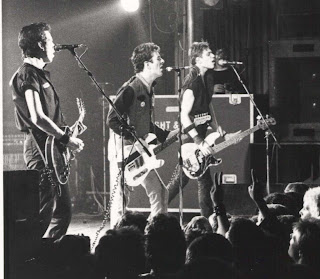 Happy Birthday Joe
Posted by The Swede at 14:40 7 comments: 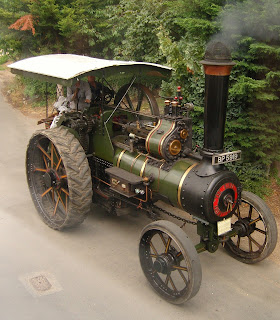 First there's a distant rumble. Then a slight vibration. After that, we have just a few seconds to grab hold of anything breakable before it tumbles to the floor, as the whole house shudders violently. The local steam engines are on the move again.

Produced by Duke Reid in 1969, Nora Dean's 'Ay Ay Ay' (sometimes titled 'Angie La La) is one of the stranger records to fall under the reggae banner. The vocal is odd and disconcerting, full of squawks, whistles and ticks, while the tune itself has a claustrophobic arrangement that wouldn't seem out of place in a Mulatu Astatke release from the same period. Once heard, never forgotten.

This is Radio Clash

While not wishing to become a permanent advert for the BBC, another short programme aired yesterday evening on Radio 4 that deserves wider recognition. Front Row dedicated it's entire ½ hour to The Clash, including a new interview with Mick, Paul and Topper, reunited to promote the forthcoming box set. In addition, fiery excerpts from a vintage Joe Strummer interview were also broadcast and, if you ask me, were worth the 30 minutes of your time alone.

My thanks go to the always wonderful Caught By the River for pointing me in the direction of a moving Radio 4 documentary, 'In Search of Nic Jones'. The programme doesn't seek to comprehensively detail Nic's career, but rather examines the man and his music, before and after his life-changing accident, via contributions from friends and family.

Nic is there too of course, modest, unassuming and seemingly without a trace of bitterness. He is content that the past can't be changed and is, to all intents and purposes, irrelevant - what matters to him most, is the 'Now'.

The Meditations were an in-demand vocal harmony group in the mid-1970s, recording artists in their own right and contributors to performances by Bob Marley, The Congos and Gregory Isaacs among others. They worked with a number of producers, but here's a fine Ansel Cridland penned tune, 'No Peace', produced by Lee Perry and released in 1978.


Previously on Saturday Scratch
Posted by The Swede at 09:22 2 comments:

We've had a long hot day out and about in celebration of Mrs S's birthday. I doubt we drifted more than 20 miles from home, but would surely have been hopelessly lost in the unfamiliar lanes and villages were it not for the trusty ol' satnav. With it's help we found a little country pub and had a rather scrummy lunch as crazy thunder storms raged on the horizons around us - somehow we missed them all.

We're both feeling the pace of such a sweltering, sticky day now, but need to keep ourselves alert in the run-up to wine o'clock! So to help us stay upright, here's a stonking live version of 'Stoned and Starving' by Brooklyn band Parquet Courts, from their recent LP 'Light Up Gold'.