Out of Brazil comes Zuzuca with 'O Trem', which translates as 'The Train', a fact that won't surprise you when you hear the tune. It's taken from the 1972 LP 'O Bom Sambista', released on the famous Okeh label and is insanely catchy - even as a confirmed non- dancer, I, unconsciously and ultimately unsuccessfully, found myself trying to throw some shapes when it popped up on random play a couple of days ago. Not a pretty sight.

Richard Williams, over at The Blue Moment, recently penned an interesting piece on the current crop of piano led jazz trios and, as a consequence, I spent much of yesterday afternoon checking out his recommendations. Five combos, each with their own distinct approach to the form and all worthy of further investigation, Manchester's GoGo Penguin being my pick of the bunch at the moment. Try sitting still to the groovy 'Hopopono'.

The Kora is a beautiful and mysterious instrument. It faces towards the player, who makes very little physical movement, yet simultaneously creates the rhythm, melody and improvisational flourishes for each piece. There are no pedals, gadgets or loops, just 21 strings.

The oral history of Toumani Diabaté's Malian family tells that he is the 71st consecutive generation of musician in a patrilineal line. Last Thursday evening he appeared in concert with the 72nd generation, his son Sidiki. Toumani, probably the world's greatest living exponent of the Kora, provided the gravitas and experience, while Sidiki, encouraged by his Father, pushed, prodded and improvised in a slightly more attacking fashion, driving his tradition forward. Together, the music they made verged on the other-worldly. 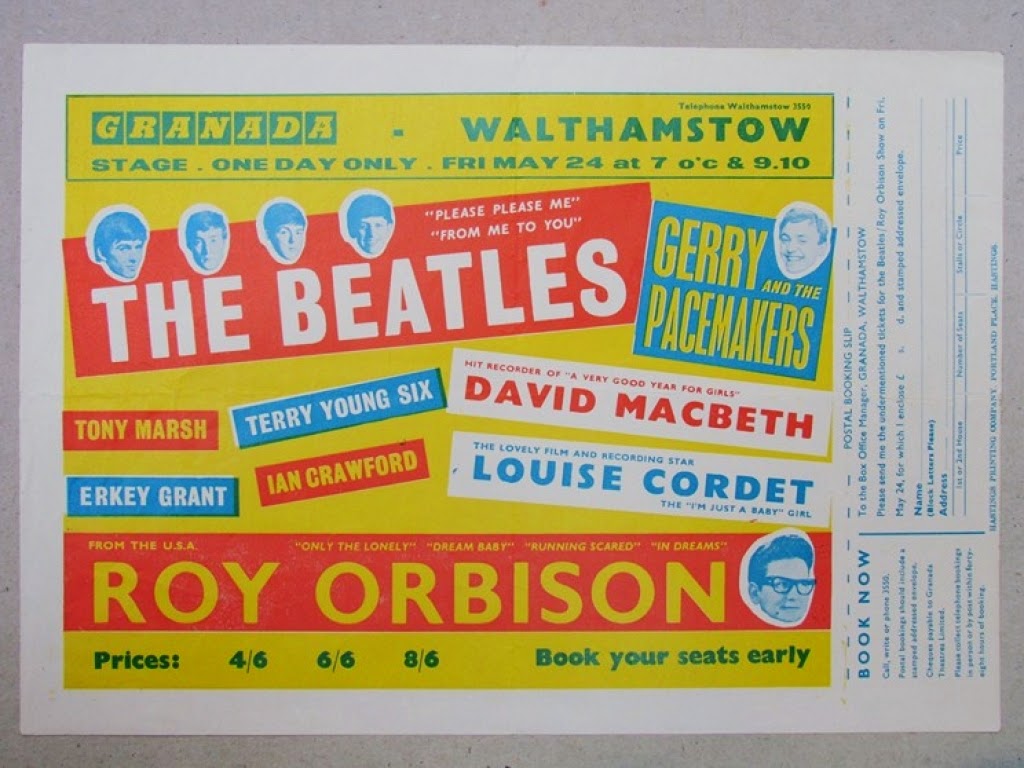 Back in the summer of 1963, given the choice between nipping just around the corner to catch The Big 'O', The Fabs and Gerry & his mates at the local fleapit, or heading off to Southend-on-Sea to work on my inflatable ball balancing routine....well, it would've been no contest really. 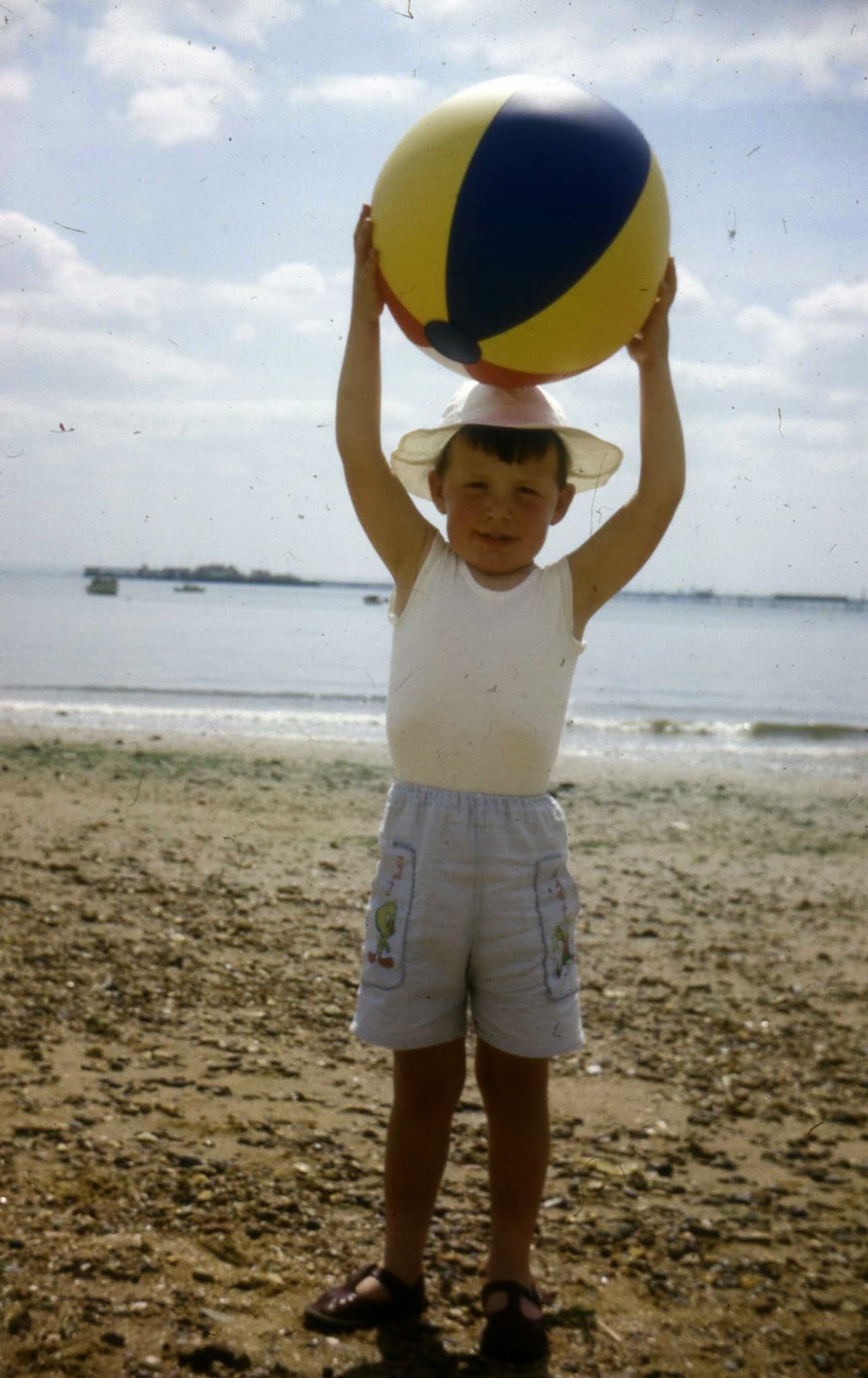 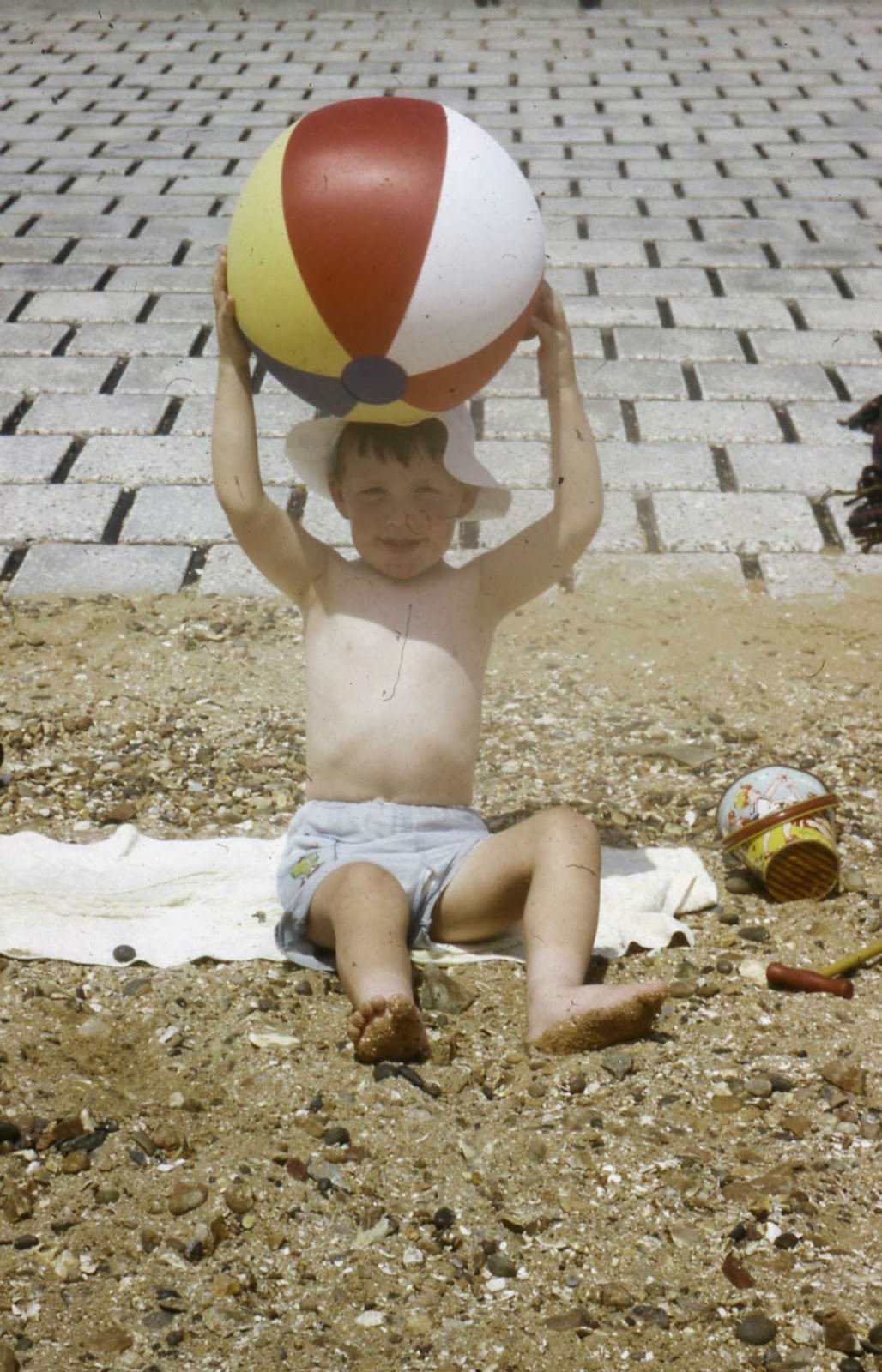 Mind you, if someone had told me about Erkey Grant (& the Earwigs), I'd like to think that my answer might've been quite different.

It's something that until 2010 was utterly unthinkable. Even after his unexpected re-emergence it was going to be very, very unlikely. I'm talking about the fact that this afternoon I purchased a ticket to see the great Nic Jones in concert. I've typed the sentence, but can still barely believe it's true. After four years of sporadic festival appearances, Nic and his son Joseph have announced a short tour of small venues in October, so if you live in, or near, Swansea, Leicester, Bristol, Birmingham, Norwich or Lewes, get over to Nic's official website and bag yourself a ticket pronto. These will be emotionally charged evenings.

Version City #27 - Simba sing Richard Berry, The Kingsmen & many others...

We've probably all been privy to more versions of 'Louie Louie' than is strictly necessary in one lifetime, the best of them transcendent and the worst unlistenable. Here's a new one on me though. Simba were an unlikely amalgam of South African band Assagai and UK progsters Jade Warrior, who came together in 1971 to issue this, their one and only single. I discovered it on the appropriately titled 1973 compilation LP, 'Afro Rock Festival'.

If you'd've come round to my house in late 1978, chances are that one of the records on my turntable would've been 'Fire in Soweto' by Nigerian artist Sonny Okosun. It was a staple. So imagine my surprise (albeit 26 years later) to discover that The Clash demoed the very same song, retitled 'Where You Gonna Go (Soweto)', the following summer, for possible inclusion on 'London Calling'. A poor quality recording of that demo appeared on the 25th Anniversary edition of the album in 2004.

It's been 10 years since curiosity led me to pick up a copy of Micah Blue Smaldone's solo debut, 'Some Sweet Day', while on holiday in New York - without previously having heard a note. A year later I stumbled upon his next album, 'Hither and Thither' (still one of the all-time great LP titles), in similar circumstances. And that's the way it's continued really. Self publicity isn't high on Micah's agenda, so it's been a case of bumping into his new releases, side projects and one-off tracks more by luck than judgement, while remaining frustratingly unaware of his occasional European visits until long after the event. 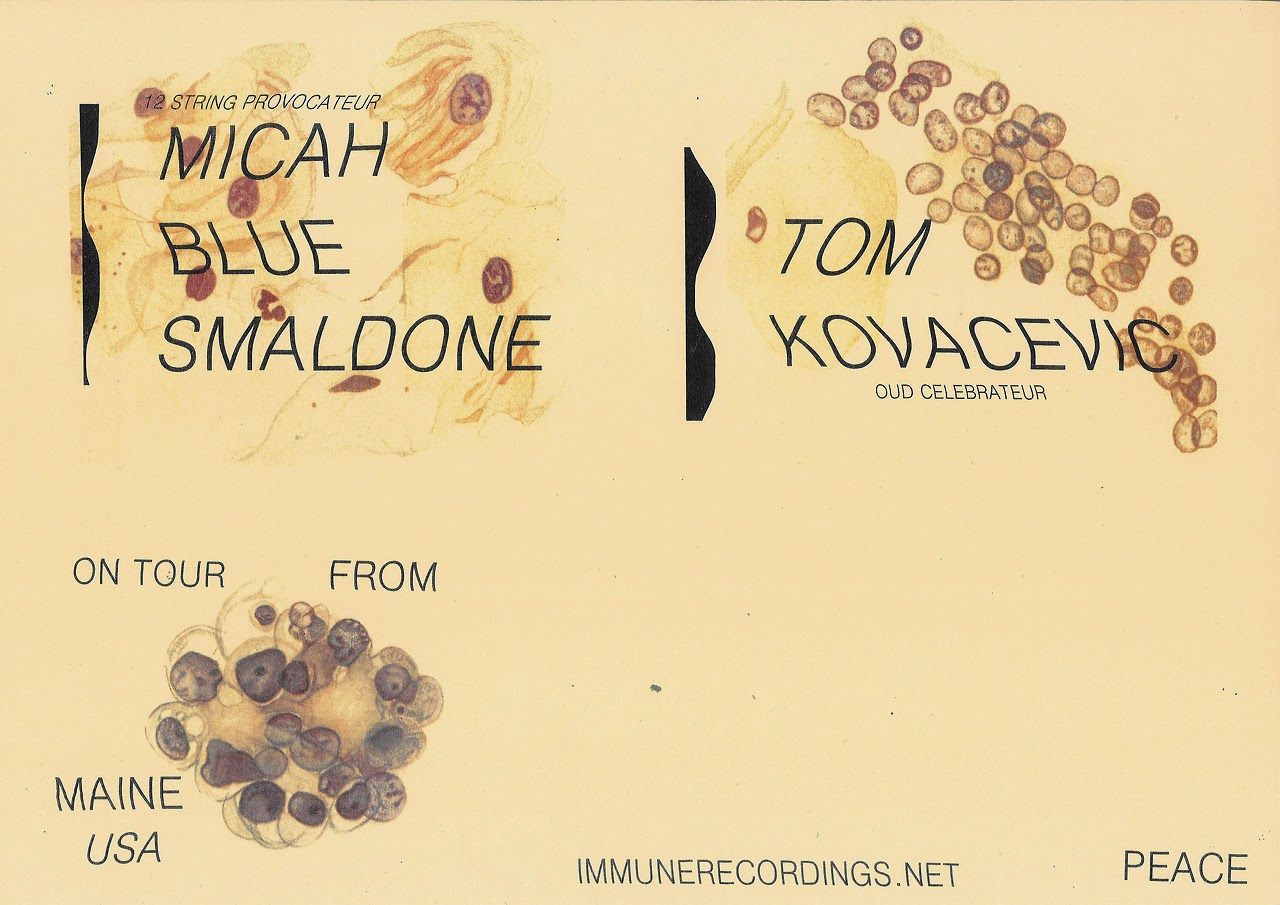 In April, however, I dropped by Micah's infrequently updated website to discover, to my great delight, that a UK tour was imminent and a couple of weeks ago, in the unique and intimate surroundings of The Foundling Museum in London, I finally, finally, saw the great man live in concert.

In recent years, his studio recordings are sometimes embellished by other musicians, live though, it's just Micah and his 12 string guitar, intense and direct, delivering a series of dark, lyrically dense, folk-noir songs interspersed with Piedmont fingerstyle instrumentals. It was a performance I waited ten long years to witness and I barely breathed for it's duration. It was quite magnificent.

My recent run of gigs continued last night with a trip to the small Waterfront Studio in Norwich. Support for the evening came from Scottish duo Honeyblood, who made a fine old racket and justifiably went down a storm with an engaged audience. A strong set of songs, effortlessly delivered.


I featured Courtney Barnett back in February (here) and am very familiar with her material, but I was totally unprepared for just what a force she and her band have become after a few months on the road. Barnett now fronts what, at times, can only be described as a power trio. They truly were a sight and sound to behold and the clutch of new songs scattered through the set from her upcoming debut LP, show absolutely no dip in quality. Miss Courtney and her band at your peril - they won't be playing such intimate venues for very much longer.

Here's an audience recording of 'Depreston', from Brighton last week. A solo performance of a new song with a twist in the tail.

My family's move to Ipswich in 1975 afforded me regular access to live music for the first time, as local venue, The Gaumont, was a stop on the national circuit and only a short distance from home. After a concert, my pals and I invariably headed straight round to the back of the building, in the hope of getting our programmes autographed as the band headed from the stage door to the tour bus - as a result I amassed quite a collection after a few years. Reality started to bite in the early 1980s, however, when I found myself in charge of a record shop in Essex and discovered that managing my personal finances was trickier than managing staff and stock levels. Consequently, I sold the majority of my autographed programmes for a pittance (along with large swathes of my record collection and anything else that wasn't absolutely essential at the time) to help make ends meet. Just a precious few souvenirs have survived from those evenings at the Gaumont.

In July 1979, a week before the release of 'Reasons to be Cheerful, Part 3', Ian Dury & the Blockheads came to town for a two night stand. Perhaps it was because it was the first of those two shows and he was in no hurry to go anywhere, or maybe it was what he always did, but my pals and I were saved a wait round at the back door, when, 10 minutes after the concert ended and the majority of the audience had dispersed, Ian ambled back into view from the wings, sat himself down on the lip of the stage and began chatting with whoever was still around. Typically, on the one occasion where I had all the time in the world to grab an autograph, I found myself with nothing for him to sign. There either weren't any programmes available or I chose not to buy one that evening, I can't remember which. Half a dozen of us chewed the fat with Ian for ten minutes while I patted my pockets, trying to find a scrap of paper for him to squiggle on. I opened my wallet and there it was - a pound note. I handed it over and asked Ian if he'd mind signing it. He gave a big, wheezy laugh, lent over the note and wrote 'Ian X' and went to pass it back, then changed his mind. 'Hang on a minute' he said, before adding more writing beneath his autograph. 'What's that say?' I asked. 'I'm Mr 10%' he said with a grin.

Ian Dury would've been 72 today. Here he is in 1983 with 'Really Glad You Came', a post-Blockheads single, perhaps sonically a little of its time, but a neglected gem nonetheless. The TV show is Pebble Mill at One and Ian looks less than thrilled to be there. Check out that stare at the end of the song!

I was 4 years old and less than a mile away. I could've gone to the early show and still been home for bedtime.

'Sir Ollife Leigh & Other Ghosts' is the first LP Oliver Cherer has chosen to issue using his own name, previously working exclusively under the Dollboy moniker. The record examines loss and the end of life, with artists such as Robert Wyatt, Martin Carthy and Syd Barrett initially coming to mind as musical touchpoints.

From 'Sir Ollife Leigh & Other Ghosts' this is 'When We Shut Down'.


And in case you're not familiar with his previous work, here's Cherer in Dollboy mode, with the beautiful 'One Liner' from 2009's 'A Beard of Bees'.

I caught up with four old friends recently. We were absolutely inseparable back in the day, but unfortunately lost touch over 45 years ago. They haven't changed a bit. 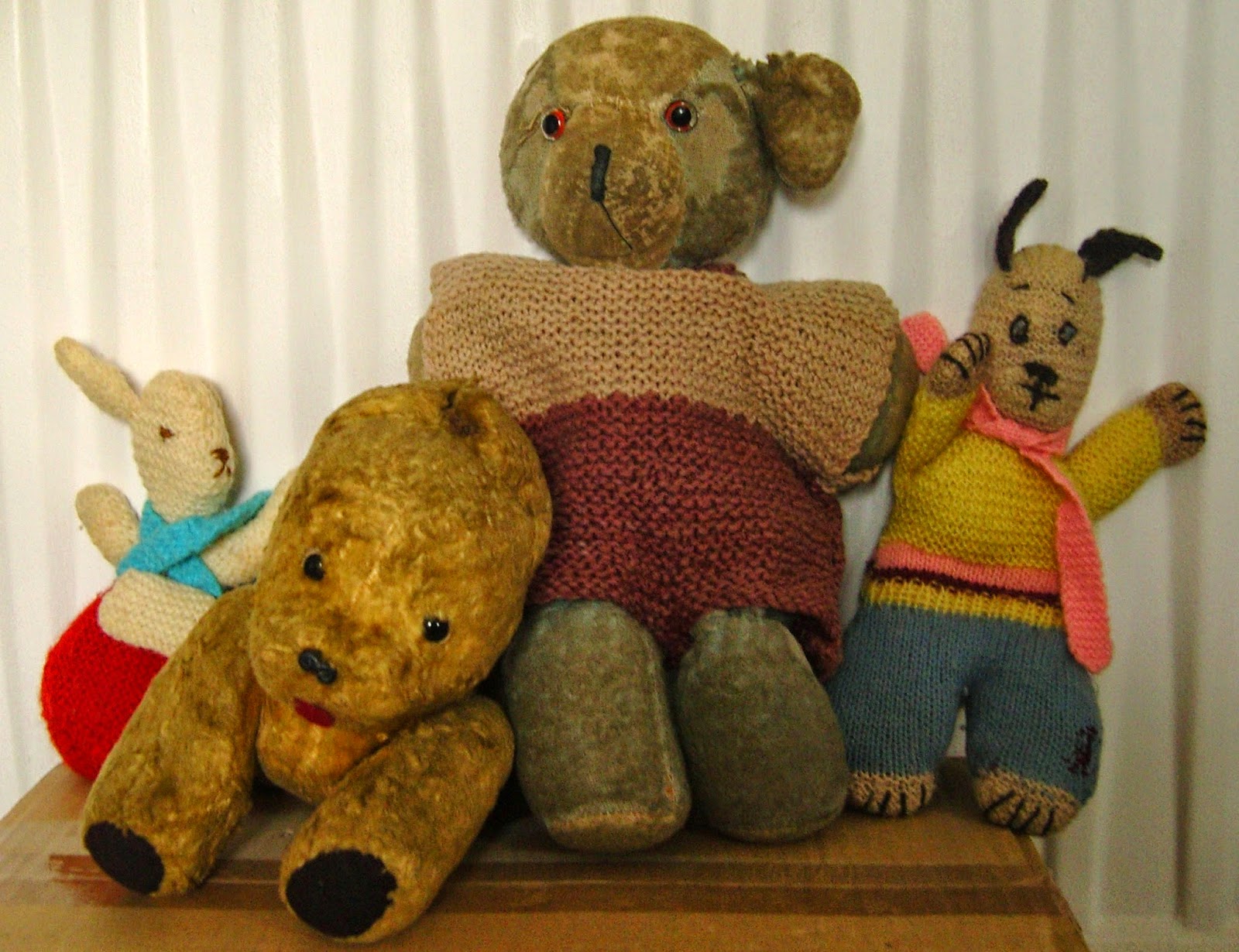