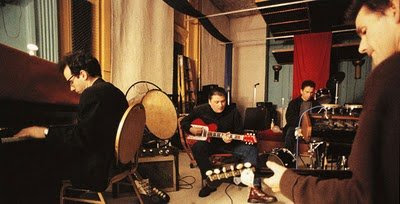 Latin Playboys was a Los Lobos side project, consisting of two fifths of that band, David Hidalgo and Louie Pérez, plus producers Tchad Blake and Mitchell Froom. They issued a self-titled album in 1994, followed by another, 'Dose', in 1999. At the time these releases were difficult to track down in the UK - the first available, but unpromoted, the second only obtainable at considerable expense via the import market. The band were awkward to classify - sharing the roots heritage of Los Lobos, but taking the sound to more experimental places. Think 'Mule Variations'-era Tom Waits....without Tom - told you they were difficult to classify! If you like 'Kiko'/'Colossal Head' period Los Lobos and are up for something similar, but a little more off-kilter, then hunt down the first album at the very least.
To whet your whistle, here's 'Ten Believers' from the debut and a very fine 1999 live clip of 'Mustard' from 'Dose', the latter featuring a guest turn on fiddle from recent Monday Long Song star Lisa Germano.
Latin Playboys - Ten Believers
Posted by The Swede at 07:00 2 comments:

I've been living in the new gaff for nearly five months now, yet I've still to meet, or even cast eyes upon, four of my six immediate neighbours - they come and they go, very quietly it has to be said, at all hours. I'm assuming various forms of shift work are involved. Anyhow, while enjoying a few days off work last week, I took the opportunity to make myself known to any of the locals who might also have happened to be at home, via the good offices of On-U Sound collective Singers & Players. Over the course of one afternoon I played through 'War of Words', 'Revenge of the Underdog' and 'Staggering Heights' at, what can probably be best be described as, a potentially neighbour-bothering volume, but I never heard a peep from any of 'em, so I can only assume that either my neighbours weren't at home or weren't bothered. 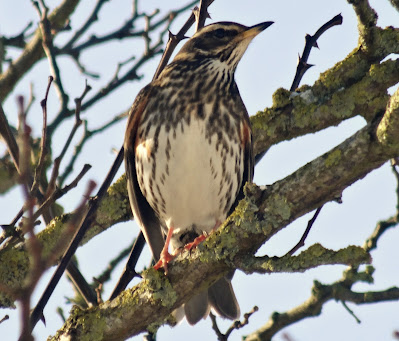 I always got a big kick out of photographing the birds that visited the grounds of the former Swede Towers - I occasionally shared the resulting images on these very pages. When I relocated last October, I assumed those days were well and truly over. My second and third floor apartment sits at the back of a converted late-19th century maltings, with no great views to speak of from the living room windows downstairs, save the back gardens of neighbouring houses. It transpires that my initial negative assumption was a tad hasty, however.

As I type these words I'm upstairs, sitting beneath a Velux window that affords me a direct eye to the sky - the only other objects in my line of sight are the overhanging branches of a tree (sycamore I think, but I'm no expert). To my delight I've discovered that the tree in question appears to be a pretty convenient stopping off point for all manner of feathered friends. It's a bit like having my own private hide - I can see the birds, but they can't see me. The most exciting thing I've spotted so far was a tree creeper working its way up to the very top branches. I've only ever had a single fleeting glimpse of one before, but this sighting was clear as a bell, uninterrupted and a real delight. I was so transfixed by the tree creeper that I didn't even reach for my camera, but when a small group redwings settled for a while, I hastily fired off a bunch of shots. I still only have a simple point and press camera and I was shooting almost directly into the sun so by and large the results weren't anything special, with the exception of the one at the top of this post, which I'm well pleased with. I'll let you know if anything else interesting drops by. 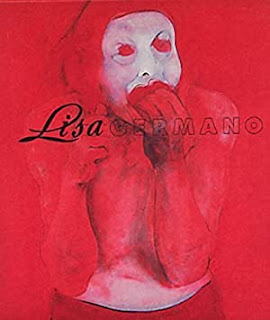 In the years leading up to her 1991 debut LP 'On the Way Down From the Moon Palace', Lisa Germano recorded for such diverse acts as Simple Minds, Indigo Girls, The dB's, Bob Seger and John Mellencamp, predominantly as a session violinist. Latterly, she's continued to contribute to albums by the likes of David Bowie, Eels, Howe Gelb, Sheryl Crow, Crowded House and Iggy Pop. Germano's second LP 'Happiness' was released in 1993 on Capitol in the States, later catching the ear of Ivo Watts-Russell, who remixed and reissued the album on 4AD in the UK the following year, the first of four long players she'd put out on the label. The reissued 'Happiness' was proceeded by the 'Inconsiderate Bitch' EP, which, confusingly, includes this haunting and greatly extended version of the LP's title track. 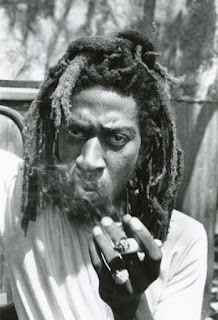 Neville Livingston, better known as Bunny Wailer, the last of the original Wailing Wailers, died yesterday, five weeks short of his 74th birthday. Bunny, Bob Marley and Peter Tosh formed The Wailers in 1963, releasing dozens of singles and six LPs, before splitting in 1974, leaving Marley to carry the band name on into legend.

Bunny continued to record prolifically as a solo artist, broadening and experimenting with his sound by incorporating elements of dancehall, electro and rap into his music. It's that initial clutch of post-Wailers albums between 1976-81 that are absolutely crucial though. Blackheart Man, Protest, Struggle, In I Father's House, Sings the Wailers and Rock 'n' Groove, plus a bunch of terrific non-album singles, are all essential additions to any reggae collection.