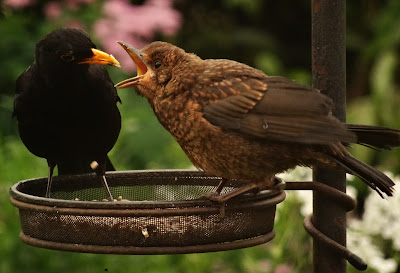 Feeding time in the garden over the weekend. The kids are growing up fast. No wonder he feels the need to let off steam every morning!

Because of staff holidays I was offered a stretch of early shifts last week, which meant getting out of bed at 4.30 and into work by 6am. It was a long haul, but I successfully negotiated the week despite feeling more knackered than usual by the end of it. One morning (I don't remember which, they all blur into one) I fuzzyheadedly checked my clock and saw that it was exactly 4am, leaving another half an hour to doze. The pre-dawn light was weak. All was still and absolutely silent, apart from Mrs S breathing gently beside me. I closed my eyes. It felt like little more than a blink, but when I opened them again, the volume of the world had increased to a cacophonous level. The dawn chorus was in deafeningly full swing. I looked at the clock. It read 4.12. Just 12 minutes had elapsed, but in that time the local robins, sparrows, wrens, cockerels and finches had all kicked off big style. Even the visiting cuckoo somewhere out on the marsh behind the house was joining in with gusto. Leading the charge, as always, was the neighbourhood blackbird population, one of which uses the ledge above the dormer window in our bedroom as a vantage point each morning for maximum volume and sound projection. 'Shut up' mumbled a half asleep Mrs S as I slipped out of bed.

Just lately, during my breaks at work, when not digging into the recent batch of decent new releases, I've been reacquainting myself with the music of the 1960s/70s Canterbury Scene and related spin-offs. This past week it was the turn of Steve Hillage, whose early solo albums were big favourites of mine as a teenager, until the advent of punk and post-punk set me off in a different direction. The opening track from his third LP, 'Motivation Radio', felt a particularly apt one to revisit.

Steve Hillage - Hello Dawn
Posted by The Swede at 07:00

Liked the Steve Hillage track, though I expected something a trifle more sedate. You don't mention wood pigeons or collared doves in your menagerie - but count yourself lucky if you don't have any hanging round at 4am, because they make the most godawful racket. Anyone who ever tells you "cooing" is a relaxing sound hasn't heard it trumpeted through their window at the crack of dawn.

We got 'em Rol! The list could've gone on and on. I 'm particularly fond of the local collared dove community, they're so fearless and nosy.
The first two Hillage albums more or less carry on from where he left off with Gong, but by 'Motivation Radio' he was beginning to dip his toes into the electronic dance music that would come to fully occupy his time a little further down the line.

Yes the dawn chorus is now in full swing up here too - Bit rubbish if you're a light sleeper. I must have missed something around here, but are you back in the world of record shops?

Back in retail Alyson, but not record shops. That adventure ended 18 years ago - blimey, where did that time go? I work in a supermarket now with no responsibilities, no pressures and nice workmates. It's quite knackering, but really enjoyable. Was only supposed to be working 16 hours per week, but am actually doing over 40! Hence my low profile round these parts in the past few months.

Ah, I knew about your Xmas stint but hadn't realised it had carried on - Sounds pretty good and although a bit knackering, nice not to have all the managerial pressures. I miss working with people so may well think along the same lines once I get a few things sorted out around here.

Fantastic photo! The baby blackbirds in particular are abundant here at the moment; oh I love this time of year -and I don't care what anyone says, I love all the noise too! I could take endless birdsong at any time of day or night, something about it is just so life-affirming. I'm just indoors now after my nightly "hedgehog watch" too - not just a very healthy looking hedgehog but an audacious brpwn rat, a manic woodmouse, a low flying bat and several big garden snails all crossed my path. I'm in my element!

And there they are. Glorious photo! Spring has sprung! I saw a huge crow snatch a baby bunny the other day. I had know idea that was possible, and I’m scarred for life. Then again, a guy on his bike was killed by a cougar not far from here too. Wild Kingdom in these parts!

Alyson. I hope it happens soon for you. I can honestly say that this job has given me a new (if knackering) lease of life.

C. Glad you liked the shot. It sounds as if it's all go round your way too!

Brian. A man killed by a cougar? Blimey. That puts the wildlife in our back garden into perspective. You take care.