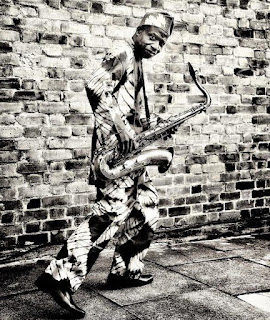 Afrobeat heavyweight Orlando Julius lead a number of his own bands as well as working with the likes of Fela Kuti and Hugh Masekela over the course of a 50+ year career. There's a slew of top notch compilations of his music out there, on labels such as Ekosound, Vampi Soul and Strut, all worthy of investigation. In 2014 Julius collaborated with The Heliocentrics to record 'Jaiyede Afro', from which the fabulous 'Be Counted' is taken. My only gripe with the tune is that it fades after 11 and a bit minutes - it should've been twice as long. Do yourself a favour and check out the whole album here.

Orlando Julius passed away at the age of 78 earlier this year.

Orlando Julius & The Heliocentrics - Be Counted 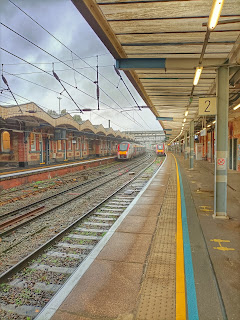 Apologies for the longer than usual radio silence this end. I recently hit a wee bump in the road that temporarily knocked me off course, but today you find me freshly returned from a whirlwind trip to the smoke, where I caught up with my Aunt as well as two nights of Mr D's Palladium residency. Irritatingly, my car began misbehaving just a couple of days before I was scheduled to motor South, requiring a hasty change of travel plans on my part. Long story short, I fired up my digital senior person's railcard for the first time since journeying North for BlogCon '22 in Edinburgh and let the train take the strain. Attached is a quick shot I took early doors, while waiting at a railway station with a ticket for my destination.

Today's soundtrack is provided by Chris Barber's Soul Band, who are joined on this very groovy 1965 single by legend of the Hammond organ, Brian Auger. 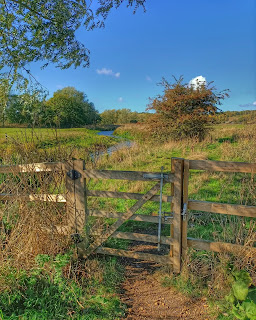 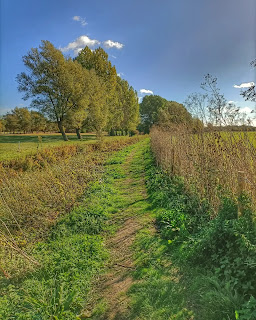 Heavy rain on Monday morning made the prospect of a decent day-off walk unlikely, but the weather had miraculously improved by lunchtime, so I was belatedly able to get out and stretch my legs properly for the first time since being knocked sideways by Covid. I took a stroll on the common. It's one of those walks that can be cut short if necessary, or easily extended if desired, by means of a series of looping and inter-connecting footpaths, stiles and gates. The common is vast and there was nary a soul around - it was bliss. The skies cleared completely, it became very warm indeed and, as is my wont, I documented bits of the walk with my phone. Honestly, my cloud storage is chock-a-block with endless shots of big skies and footpaths disappearing off into the distance. I managed 5½ miles, followed a well deserved pint at the end.

Watty Burnett was essentially a session vocalist for Lee Perry in the 1970s, on standby for whenever a Scratch production required a baritone harmony in the mix. This was exactly how he came to appear so prominently on one of the very greatest albums produced at the Black Ark, 'Heart of the Congos'. Indeed, Burnett's voice became so fundamental to The Congos' sound that by the time of the album's release he was a fully fledged member of the band. In 1977, immediately prior to his adventures with The Congos, Scratch produced a solo single for Burnett, a cover of Brook Benton's 'Rainy Night in Georgia', re-titled 'Rainy Night in Portland'. Remarkably, the masterful 'Open the Gate' was originally hidden away on the flipside of that tune, only gaining a full issue in its own right in 1980. 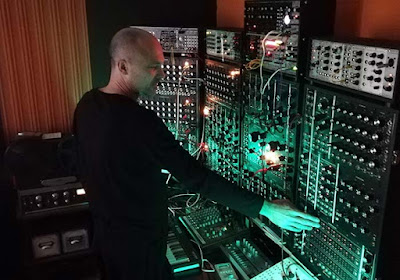 Cosmic Ground is the solo project of Electric Orange keyboard wiz Dirk Jan Müller. Electric Orange have been creating a krautrock noise since 1992, indeed the band's 7th LP, released in 2009, is memorably titled 'Krautrock From Hell'. The music of Cosmic Ground, however, is based around pulsing analogue synths, bringing to mind the early 1970s period of the mighty Tangerine Dream. There's a shed-load of music available to sample on the Cosmic Ground Bandcamp page, but to give you an idea of what we're talking about here's 'Engrained', a 17½ minute slab of the good stuff from the recently released double LP 'Isolate'. After an introductory 3½ minutes of dark ambience, the rhythm gradually takes hold and from then on we're in classic Tangs territory.
Posted by The Swede at 07:00 2 comments: 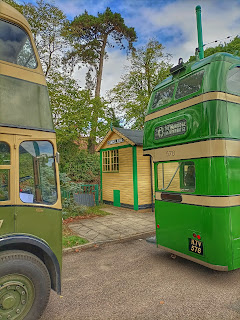 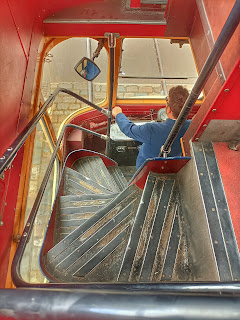 A couple of my oldest mates paid me a visit the weekend before last. It's pretty terrifying to think that I've know one of those guys for 47 years - 47! That's over 75% of my life. The other Johnny-come-lately has, however, only been a member of my inner circle for a mere 44 years - bloody newbie. In days of old we would have retreated forthwith to the nearest hostelry to spend the day drinking our own respective body-weights in alcoholic beverages. To be fair, we did neck a couple of pints later in the afternoon, but early doors we headed out to a local transport museum, where many of the usually static trolley-buses and trams had been pressed back into service for an open weekend, offering free rides to one and all. I'll admit that the trip to the museum wasn't my idea originally, but as one ride followed another the years fell away and I had a whale of a time.

Skinny's 1998 debut LP 'The Weekend' was a downtempo favourite in the latter days of my shop and I enjoy it still. While prepping this post, I was surprised to find that the band released a second record, 'Taller', in 2001, which I must track down and check out. 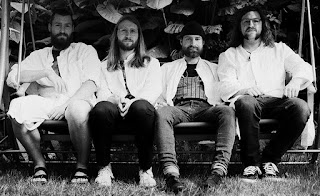 German quartet КОМВУИАТ ЯОВОТЯОИ recently released a second volume of  their 'Dickfehler Studio Treffen' recordings, following on from Volume 1 which arrived in the Summer of 2020. Like the first volume, the new LP consists of four long improvised sonic explorations, or, as their record company blurb would have it '... Krautrock grooves that smoothly evolve from outer-space spheres into psychedelic and stoner-rock vibes and back to Krautrock...' Physical copies of the record are still available here, while an abundance of further aural digital delights await you on КОМВУИАТ ЯОВОТЯОИ's Bandcamp page. In the meantime take a listen to the lugubrious 'Fehn', the tune that closes 'Dickfehler Studio Treffen II'.