We Could Leave Right Now 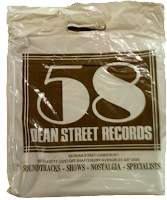 I'm writing a little ahead of time, but, all being well, by the time you read this Mrs S & I will be enjoying a short break in deepest North Norfolk. Today I turn 58 and the remote self-catering cabin we discovered a few years back has become something of an annual birthday retreat for us. I'm no psychic, but while we're away I can foresee lots of walking, lots of eating and, who knows, perhaps even a little drinking. We're looking forward to the break. The pace of our lives has increased considerably in recent weeks, so it'll be good to recharge for a few days before we pile back into it again.

Here's a band that I'm surprised to find hasn't put in an appearance on this blog before today. After Bob Dylan, I've probably seen Oysterband in concert more times than anyone else. In fact I'm long enough in the tooth to have attended both their 20th & 25th anniversary shows and just before Christmas I caught a date on their 40th anniversary tour - ouch! That means that when these guys started playing together, I was but a mere 18 year-old whippersnapper.

Oysterband - We Could Leave Right Now
Posted by The Swede at 07:00

Happy Birthday Ms S - Doesn't feel like a year ago since I was last sending good wishes, and I'm not far behind as you know. Scary.

Enjoy the break as it sounds as if you have a lot on your plate right now.

A Happy Birthday to you and enjoy your Norfolk break.

A very happy birthday to you TS. Enjoy your well-deserved eating/walking/drinking break with Mrs S (looks like the weather's turned around for you too).

Where has the time gone? Like Alyson says, you must be having two or three birthdays a year now because it feels like you just got back from your last retreat at North Norfolk. Glad you can still get away for a bit, Swede. My best wishes to you.

Hey, Happy Birthday TS. I stopped counting a few years back - even though it did mean destroying my passport, going into the witness protection programme and going off grid.
Perhaps if we used Binary it would appear a lot less?

Hey, Happy Birthday TS. I stopped counting a few years back - even though it did mean destroying my passport, going into the witness protection programme and going off grid.
Perhaps if we used Binary it would appear a lot less?

Happy birthday Swede- hope yo have a great break.

All the best Swede. Sounds like a good way to spend your birthday.

Belated birthday greetings, Swede. Hope you have a great time.

A belated Happy Birthday, Mr. S! I hope you and Mrs. S. are having a smashing time in Norfolk.