The Tears They Started Falling 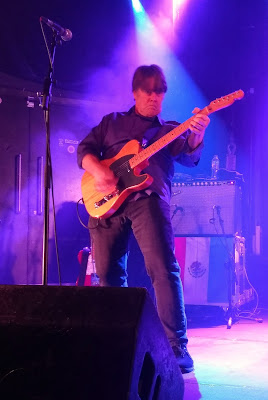 Tom Stevens on stage at the Cambridge Junction, October 2019. Photo by your humble author.
I was extremely saddened to learn of the sudden and unexpected passing of Tom Stevens on Sunday, at the age of 64. Tom is probably best known for his work as one quarter of The Long Ryders, a band I saw in concert many times during the early-to-mid 1980s and was fortunate enough to catch up with once again at the Cambridge Junction in 2019 (review here) - the intervening years had not diminished their powers one iota. Among his his many extra-curricular activities, Tom released a clutch of well respected solo albums and contributed to the essential 1985 Danny & Dusty LP 'The Lost Weekend'.
Tom's beautiful 'Let it Fly' is one of the highlights from the 2019 Long Ryders LP, 'Psychedelic Country Soul.
The Long Ryders - Let It Fly
Posted by The Swede at 07:00 6 comments: 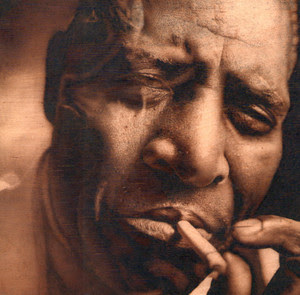 Chicago blues giant Howlin' Wolf died 45 years ago this month at the age of 65. In his prime, Wolf stood at 6ft 3 inches, weighed in at nearly 21½ stone and had a voice to match his imposing physical countenance. Would we have had Captain Beefheart or Tom Waits without Howlin' Wolf? Unlikely I think.

The master tapes of many classic Howlin' Wolf recordings were destroyed in a Universal Studio backlot fire in 2008, along with those of hundreds of other artists ranging from Sidney Bechet to Captain Sensible and Al Jolson to Styx. 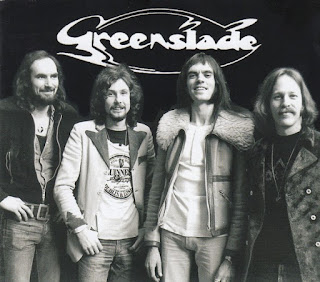 After notching up 73 entries of the Version City series by early December 2019, I somehow failed to add to that tally at all in 2020 and the idea fell by the wayside. Here though, finally, is entry No.74.

German singer/songwriter Konstantin Gropper has released half a dozen albums trading as as Get Well Soon, in addition to creating music under his own name for films and TV. Gropper's first album, 'Rest Now, Weary Head! You Will Get Well Soon' was a big favourite in our house in 2008. The inclusion of a cover of Underworld's 'Born Slippy', may have seemed initially unlikely, but it's judged to perfection. 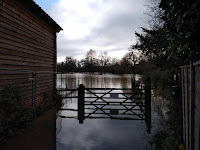 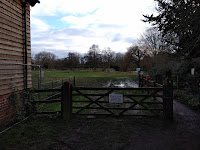 This is the meadow, across the way from my place, underwater on Xmas Day and visible again on Monday 28th.

In the week leading up to Christmas I drove to work in the dark and I drove home in the dark. No biggie, it's what happens at this time of year. On December 22nd it started raining and didn't really stop until the early hours of Christmas morning. The rain coincided with unusually strong tidal surges along the River Waveney. Throughout those commutes I hit standing water several times, which I don't mind admitting is a bloody scary thing to happen in the dark. I'm not talking puddles either. These were fast flowing, deep streams, moving across the carriageway and it got to the point where I just hoped for the best that I'd make it through some of them without flooding and stalling the car. While I made it by the skin of my teeth, others weren't so lucky and several vehicles stood abandoned by the side of the road. All this time, I was obviously aware of the ferocity of the weather conditions, but had no visual confirmation as I journeyed through the darkness. I was just grateful to make it to and from in one piece.

On Christmas morning I woke to a message from a friend checking in to see if I'd been affected by the floods. He'd read online that the emergency services had been on the scene in my town for the whole night. When I looked online myself, the first thing I saw was a photo of a fire engine standing in a very familiar location - directly outside my place. I went out for a wander in the warm sunshine and saw the devastation for myself. The worst flooding in this area for over 50 years by all accounts, for a while only one road remained passable in and out of town. Surreal scenes of streams, paths, fields and roads all gone, replaced by vast lakes. All the properties beyond mine in my street, down towards the river were either still under water or had sustained serious flood damage overnight and, as I walked around the outskirts of the town, the story was repeated again and again. It was terrible to see people having to salvage their saturated belongings on Christmas Day, particularly at the end of such a dreadful year. Just over a week later and the water has gone, but for the unfortunate households affected, the clean-up will take considerably longer.

Released in 1979 on the legendary Studio One label and produced by the equally legendary Coxsone Dodd, 'Flood Victim' rides the popular Real Rock riddim, well known to many for its use in Willie Williams' original recording of 'Armagideon Time'.