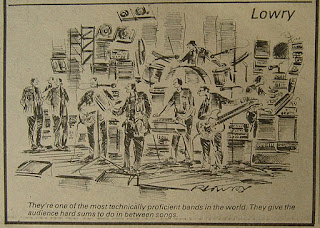 It's become a cliche, because it's borne of truth - David Bowie bestrode the 1970s and was a musical roadmap, guiding the way for my generation as we came of age. He's done other great work of course, but it's the run of albums from 'Space Oddity' in late '69 through to 'Scary Monsters' in 1980 that cement his legacy.

In August 1997 I was crushed towards the front of the crowd at the Shepherds Bush Empire, for a show on the 'Earthling' tour. The album flirted with drum'n'bass, so I was anticipating something of a sonic assault. To my astonishment he walked from the wings with an acoustic guitar and opened the show with 'Quicksand' from my first Bowie LP, 'Hunky Dory'. Grown men wept. 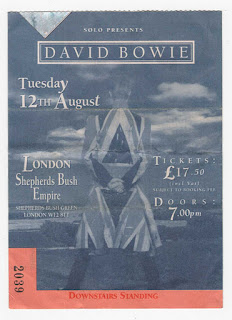 That performance is available to view on YouTube thanks to an amateur camera operator doing a sterling job. This, however, is from a couple of months later, when the tour had moved on to the USA and is notable for some snazzy professional camera work which allows us a glimpse at Bowie's footwear of choice at the time - sandals with socks!

In October last year we moved to a new (old) house in a semi-rural location. I find moving stressful at the best of times, but knowing that this place was something of a 'project' only served to make my palpitations all the more palpable - D.I.Y. is far from my forte and the budget is tight.
Now the builders are here and our home resembles a scaled down version of Thornley Manor as rubble accrues and a layer of dust covers everything. I've been a mess since they arrived. Everytime the gaffer comes downstairs and calls me over, I know he's found another problem...and my stress level increases a little more.
I know I'm being ridiculous and all the disruption will be worth it in the end, but my poor old heart can't stand much more! Conversely, my partner has her nose buried in catalogues and websites, tracking down a bargain shower here and realistically priced flooring there and embracing the challenge of it all. While I freeze like a rabbit in the headlights, overwhelmed by the chaos around me, she (to paraphrase an ex-President) has the vision thing - and I'm grateful for it.
Meanwhile, back at Thornley Manor, our favourite bunch of builders, barred from the only pub in the village by Arthur Pringle the landlord, settle down to watch a video.......