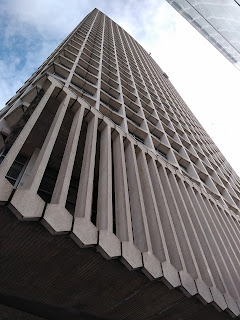 On the very day that the rules of international travel to and from the USA changed last week, my cousin flew in for a brief four day visit with her Mum, the first time they've been together for a couple of years. I was able to make it down to London for two of those days and I can confirm that it was a joy for all concerned.

On Monday my cousin and I took the tube into town for lunch and a wander around Soho, where we dropped into both the Bowie and Stones pop-up shops as well as Morgan Howell's current outlet on Beak Street. If you don't know Morgan's incredible SuperSizeArt work take a look here (and if you happen to have a wad of money burning a hole in your pocket, one of the T.Rex pieces would look very nice on my wall).

I know that part of town fairly well, but as we came out of the much altered Tottenham Court Road tube station I was unsure exactly where our chosen exit would lead and for a moment couldn't quite get my bearings. Then I looked up.

We'll Give All We've Got to Give 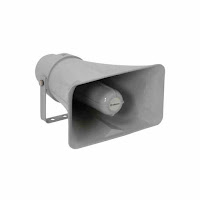 What's the oddest, most out of context music you've heard being piped into the supermarket ether as you do your weekly shop? I mentioned my own company's somewhat limited offerings in a previous post, though I'm pleased to report that they've upped their game a little in the interim. Every now and then a random Bowie song will drop into the mix and a couple of months back several Bob Marley songs entered the playlist rotation and still occasionally pop up to delight me when I least expect it. These are very welcome additions to the rather limited selection of tracks that have formed the basis of my working soundtrack for the past couple of years. Every now and then however, complete one-offs appear from nowhere, play once and disappear forever. While dragging a cage full of cakes from the warehouse in the summer, I was surprised to hear 'Turning Japanese' by The Vapours jumping out of the speakers and on another day the reasonably obscure 'One Step Up' by Bruce Springsteen got an airing, neither of them to be heard again. Nothing prepared me for what I found myself  involuntarily singing along to a couple of weeks ago though. I made it, word perfectly, through the first verse, before I fully cottoned-on to what was playing over the music system of a bustling supermarket in the Autumn of 2021. I was gobsmacked, though disappointed that I couldn't find anyone else my age on-shift, with whom to share my bewilderment. Whose idea was it to put this on the playlist?

It's easy to forget how important UB40 were on the UK reggae scene from 1980-82. During this period the band released a clutch of fine singles (including 'King', 'The Earth Dies Screaming' and 'One in Ten'), three strong studio LPs ('Signing Off', 'Present Arms' and 'UB44'), not to mention an album of dub remixes. They were also regularly championed by John Peel, for whom they recorded two sessions. I saw them supporting The Pretenders, who were promoting their own debut LP at the time, in early 1980 - what a great night that was. 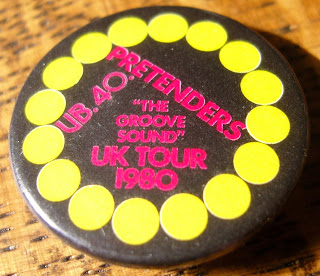 In 1983 came 'Red Red Wine' and the massive 'Labour of Love' album after which their career inevitably took a very different, more mainstream course. In 2008, after maintaining the same line-up for 29 years, lead singer Ali Campbell and keyboard player Micky Virtue acrimoniously left the band, followed in 2013 by vocalist Astro, the three of them forming an alternative version of UB40, much to the ire of the remaining original members.

2021 has been a very sad year for the UB40 camp with the passing of saxophonist Brian Travers in August and Astro earlier this month. Such tragedies would cause many people, however estranged, to offer an olive branch, if only temporarily, but while Ali Campbell left a series of clearly devastated posts on his social media accounts following Astro's sudden death, the original band put this dry missive up. 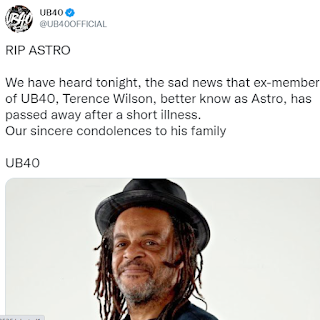 If a PR person put this out they should be relieved of their position with immediate effect. If this statement was actually drafted by the band they should hang their collective heads in shame. It's a petty, point-scoring little tweet, which managed to successfully unite fans of both versions of the band in condemnation. Would it have hurt so much to dignify Astro with the epithet 'founding member' or original member', rather than the cold, clinical 'ex-member'? Very sad and unnecessary.

I still pull out those first few UB40 records from time to time, particularly the fantastic debut 'Signing Off'. From it here's an early savage Thatcher take-down, 'Madam Medusa'. Remember them this way. 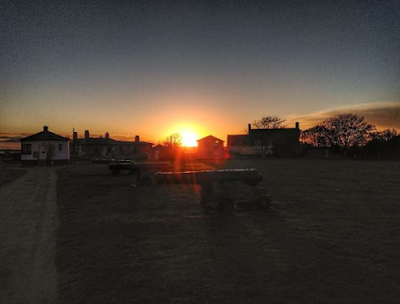 Southwold was a favourite destination for Mrs S & I. We travelled the few miles over to the coast regularly throughout our years together, particularly out of season, for many a pub lunch and cobweb-clearing walk. I'd been studiously avoiding that part of the world even before the pandemic, for fear of reawakening ghosts - indeed until this week it'd been over two years since I'd set foot in the place. On Tuesday I found myself out in that area on other business and thought that perhaps it was time to tentatively revisit the old haunts. It was a clear, gloriously sunny late-afternoon, but I initially felt myself hurrying around the streets, as if anxious to get it done and hot-foot it back out of town, so I wandered down towards the beach, gulped down several lungfuls of fresh sea air and felt my anxiety drift away. A few short weeks ago I wouldn't have been able to move for holidaymakers, but now it was largely deserted. As the light faded, the air reverberated to the noisy chatter of hundreds of Barnacle Geese coming down onto the grazing marsh beyond the houses on Gun Hill. I pulled out my phone and caught a shot of the sun's final rays, stretching across the ancient cannons that point mutely out to sea. What a lovely evening. The ghosts? They were around alright, but they kept a respectful distance. 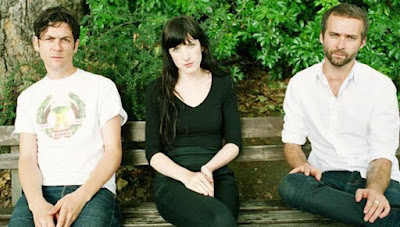 I've sure I've mentioned my brief minimal music phase in the past and even offered up a couple of samples of the stuff I was listening to, particularly while driving, in the late 2000s/early 2010s, but this is perhaps one of the more extreme examples of the form. Notionally a Spring Heel Jack remix of a tune by post-rockers The Sian Alice Group, it's actually a pulsating drone made up of little more than a barely evolving locked groove crescendo. It won't be to everyone's taste (perhaps not to anyone's taste!), but believe it or not I'd often have this on repeat for the whole 80 mile round trip I'd regularly make to visit Mum when she was poorly. It certainly helped to clear the clutter in my brain at the time.

As we join proceedings, the wheels are already well in motion and the whole thing concludes just as jarringly 16½ minutes later, as if the tape simply ran out. Somewhere out there, this tune is still going.