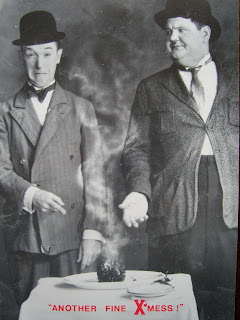 This morning, before another long day of retail madness commences, I'm briefly firing up the old laptop for the first time in nearly a fortnight to pass on compliments of the season to one and all. By any measure, 2020 has been a shocker and I remain constantly grateful for the two principle communities that I'm a part of - the gang of oddballs at work, who it lately feels like I'm spending my whole life with, and the geographically far-flung bunch of likeminded souls that hang out in this little corner of t'internet.

I finish work at 6pm on Christmas Eve and am back in the store at 8am on Boxing Day. My highlight of Christmas Day itself is already set in stone. At 8pm I'll settle down before my computer, as I have done 40-odd times already this year, to watch Robyn Hitchcock & Emma Swift perform another live Sweet Home Quarantine show from their East Nashville HQ. It's an absolute joy every week.

It feels like I've listened to very few song based records this year, erring instead towards ever longer, meandering instrumental pieces with which to carve a path through my cluttered brain. In contrast though, I'll leave you with three very short, distinctly diverse festive-themed tunes, each clocking in at 2 minutes or less.

Take care all. Enjoy your Christmas however you can and stay safe. 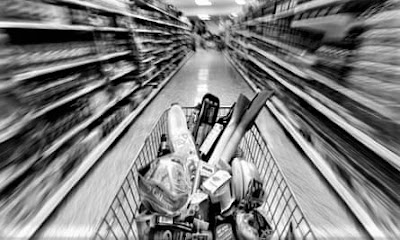 One morning in October as I clocked in for my shift, I couldn't help but notice that music was playing through the public address system, a system until then only used for imploring reluctant members of staff to 'jump on a till' when an unexpected rush occurred or to berate an inconsiderately parked customer into moving his or her vehicle. Yes, a nominal internal company radio station was on the air - in reality an external drive playing a selection of random tunes interspersed with social distancing information. The music, however, was awful - truly awful. I'd consider myself to have a working knowledge of pop music, but this stuff was unrecognisable and bland in the extreme, falling slap-bang into the category of aural wallpaper. The weeks went by and gradually it became the default background noise of a working day. Of course I expected to hear random Christmas songs phased into the playlist as we entered the festive season, but what I didn't bank on when I walked into the store on December 1st was to hear this belting out of the system.

You could've knocked me down with a feather. It was yer actual Coral....playing at work! Next up was 'Talk of the Town' by The Pretenders. Then 'One Vision' by Queen, which was slightly less welcome to be honest, but you get my drift. Suddenly, without warning, we were getting proper songs by proper artists instead of endless bucket loads of dreary muzak. Yes, this stuff is indeed interspersed with the anticipated Christmas songs, but wondering what tune is coming up next has certainly put a spring in my step each day. To date we've had music from artists such as Stevie Wonder, Joni Mitchell, Bob Marley & the Wailers, The Supremes, Steve Winwood, The La's, James Brown, Siouxsie & the Banshees, Sam Cooke, early Rod Stewart, The Travelling Wilburys, Dusty Springfield & The Four Tops to name but a few - and just yesterday 'Penny Lane' by The Fabs themselves, it really is all over the place and has become a welcome soundtrack to my working day. Even the festive tuneage stretches beyond the blindingly obvious. I mean when was the last time you heard this one going head to head with Slade and Wizzard in your local supermarket at this time of the year?

Tom Petty & the Heartbreakers - Christmas All Over Again

For the first time ever, I've had some trouble with the new Blogger. It happened when trying to embed the Bandcamp link for today's Long Song. I hope I've nailed it now. Be sure to strap in and remove any breakables from high shelves before you hit play - untethered stuff will start to move about. The band is vert:x, the tune is Clus and it's taken from their magnificently titled 2018 'Death to False Motorik' LP.
I have an inkling that someone may have posted this one before. If so, apologies all round - I'm starting to lose track!
Posted by The Swede at 07:00 4 comments: