Here's a mighty fine tune from Colorama's 2010 album 'Box'. Full-length album number three (there's also a mini-album or two knocking about) is due any day now - indeed it may already be available in Japan, as much of their previous work has debuted out there before gaining a domestic release. Carwyn Ellis fronts the band in tandem with his role as musical director for Edwyn Collins.

'Etiquette' is beautiful, timeless and a perfect soundtrack to this balmy evening.

Colorama - Etiquette by colorama
Posted by The Swede at 22:33 3 comments:

I must admit that I'd grown a bit tired of Paul Weller. I still enjoyed the odd single, but the albums had ceased to engage me and the live shows I caught in the mid 1990s and early 2000s were....dull. Despite the fact that I fitted age-wise into the bracket myself, I came to look upon his oeuvre as Dad-rock - the ultimate insult!

So I was sceptical, to say the least, when I read the early reviews for '22 Dreams' in 2008 which were, almost uniformally ecstatic. Eventually, as the praise kept coming, I checked the album out. The reviews were on the button. It wasn't so much as a return to form, as an artistic rebirth which has continued with 2010s 'Wake Up the Nation' and the fantastic new album,'Sonik Kicks'. Suddenly all bets are off and no musical style is out of bounds. I loved The Jam, but at the moment I'd argue that Paul Weller is on the form of his life.

Thirteen songs into the sixth and final night of Bob Dylan's legendary February 1990 Hammersmith Odeon residency, the piano which had sat to the side of the stage throughout the whole week, remained untouched.

Finally, after concluding the acoustic set with Mr Tambourine Man, Bob put down his guitar and ambled ever closer to the piano as the crowd willed him on. He sat down, summoned his inner Little Richard and Jerry Lee Lewis and gave us this...


Not his greatest song by any means, but what a performance - and listen to the reaction of the audience!

When a mash-up works it can be utterly inspired and this is one such occasion. Take a slice of  Richard Burton's narration of 'Under Milk Wood' and lay it over the 'Ali Baba' riddim and this is the spine-tingling result.

The problem with (still) not having proper access to my physical music collection, is that if a tune doesn't pop up on my MP3 player for a while, it's in danger of slipping off the radar. Such is the case with this sumptuous beauty, which I played endlessly during the early part of 2011 and rarely since.

I'm not too sure about the accompanying clip - I find it distracts rather than enhances - so maybe, like me, you should sit back from the keyboard for a few moments and let this one wash over you.

A little under two weeks ago, as I prepared to heave myself into the shower, I had what my Mum would have called 'a funny turn'. It felt as if someone stuck a needle into either side of my neck at the top of my spine and injected bolts of pure pain which spread instantly up and across my skull, leaving me barely conscious. It was, to say the least, a scary experience.

I stupidly tried to ignore the event and struggled on for several days, groggy and unsteady, before finally calling in to see my doctor, who referred me immediately to a neurologist and within hours, for the first time since my birth 52 years ago, I found myself in hospital.

A small bleed to the brain (subarachnoid hemorrhage) was a strong possibility - not dangerous itself, but potentially a precursor to something far more serious if it re-occurred. The specialist emphasised this point by snapping his fingers and saying it could be 'game over'. Dramatic, but he got my attention.

Thankfully, after three days of tests, including a lumber puncture (straight into the top five of the all-time most unpleasant experiences in my life) and brain scan, the diagnoses was that I had suffered a Thunderclap Headache, which may sound innocuous, but believe me, is not. A little rest and mild medication and I should be fine.

As the youngest and otherwise healthiest in my ward I was witness to the limitless patience and compassion offered by the medical staff during their 12 hour shifts to old, frail and confused men, some clearly approaching the ends of their lives.  I also briefly got to know some remarkable people who continually overcome seemingly insurmountable health problems and are determined not to 'go gentle into that good night.'

I may write about a few of those I met during my short stay in Bay 7, Bed 26, but I won't forget any of them.

Life Is Too Short For Bad Coffee

A sense of normality returned to Swede Towers this week, with the arrival of a new espresso machine. No, it's not a NEW new machine - much as my inner coffee-nerd cherished one of the top of the range pieces of kit on offer, my inner fiscally-challenged level-headed self won the day and I am now the proud owner of a second-hand workhorse purchased from a well known online auction site. 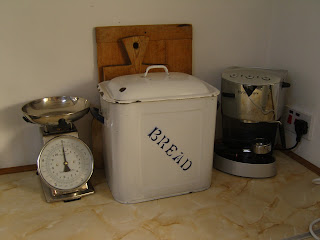 Here's the little beauty, settling in to it's new home!

Every Saturday morning the comforting thud on the doormat announces the arrival of this week's coffee selection from Has Bean (currently drinking, Rwanda Rulindo). My previous espresso machine lasted a good six or seven years, but breathed it's last just before Christmas, since when I've been on brewed coffee only, however the difference on the palate between the many different ways of coffee preparation can be immense, so I'm glad to now have the benefit of a choice once again.

Told you I was a coffee-nerd! Time for a cuppa I think!

In November 1979 I sat backstage at the Lyceum Ballroom in London and helped to interview Buzzcocks (no definite article) for a friend's fanzine. My pals and I had shambolic conversations after the show with Steve Diggle and, less enthusiastically, Pete Shelley that were somehow stretched over two issues of said journal. 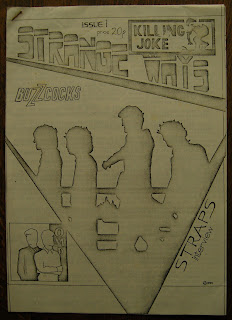 Shelley may be the songwriting genius, but I've long considered Diggle to be the engine room of the band - pushing, driving and cajoling - not to mention throwing a few shapes for all he's worth! That being said, over the years Steve Diggle has come up with a fair few little nuggets of his own.

Today is Diggle's 57th birthday and it's (unbelievably) 33 years since he was good enough to give some of his time to a bunch of ne'er-do-wells with a cheap cassette player and access to a photo-copier.

Happy birthday Steve - here's one of your nuggets.


Tomorrow marks the sixth anniversary of the sudden passing of Grant McLennan at just 48 years of age. He was the writer of 'Cattle and Cane', the song that got me into The Go-Betweens back in 1983.

While band were on hiatus during the 1990s, McLennan released four consistently strong solo albums, all of which I'd recommend unreservedly.

Here's 'Lighting Fires' from the second of those solo albums, 1993's 'Fireboy', which, bizarrely, was also included on the American version of the following year's 'Horsebreaker Star'.

In New York on one of my occasional Stateside trips to visit relatives, I was walking on The Bowery one balmy evening in 2005, zigzagging across the street between the gridlocked traffic.

At the time my grey hair was fairly unkempt and I was wearing a black & white polka dot shirt. I'm also quite tall, so I guess it's a plausible mistake, not to mention a flattering one - I've been a fan of the great man since The Soft Boys' 'A Can of Bees' LP in 1979.

I half-smiled in the guy's direction as the traffic moved on and then noticed a small spring in my step. It was the first time I'd ever been mistaken for someone even slightly well-known - and it was someone I liked!

My second experience as a doppelgänger (this time of a different musician) was in the same city a few years later and in a slightly more public arena....but that's another story.

(I met Robyn Hitchcock once in the late 1990s and neither of us - or anyone else in the room - remarked upon any physical similarities between us!)


This time last night I was flicking through some Damien Jurado songs thinking I might post one, but couldn't make a decision, so I put the idea on the back-burner.

Imagine my spooked-outness this morning when I found that sfw over at Tune Doctor had the same idea - and what a fine choice he made!

Here's a tune from Damien Jurado's current producer Richard Swift. When asked to describe his music I usually say a 21st Century Harry Nilsson, but in addition to being a terrific singer/songwriter, multi- instrumentalist and producer, he's also a  film-maker and photographer - oh yes, and he's currently a member of The Shins.