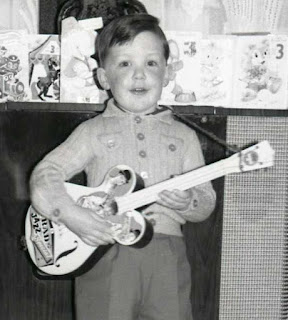 Regrets, I've had a few...and aside from all the many thoughtless things I've said and done throughout my life, one of the very biggest regrets is never having learned to play the guitar. I've always had tunes spinning around my noggin with no means of letting them out and when I was younger, would scribble reams of (admittedly rubbish) lyrics, for songs that I knew could never be completed. I had chances to learn the instrument, but just didn't apply myself - something I now bitterly regret. My last real opportunity was in the 1990's, when my girlfriend at the time bought me a guitar and paid for a couple of lessons. My tutor was brilliant. He cut to the chase, asking me what exactly I'd like to be able to play. 'This', I said, putting on Bob Dylan's cover of the 1931 Mississippi Sheiks song, 'Blood in My Eyes'. After two lessons, a little progress, followed by frustration, distractions and despair, I put down the guitar and stupidly never picked it up again.

Mississippi Sheiks - 'Blood in My Eyes'

You're not alone there, Mr. S - I have the same regret re: the lack of commitment to the guitar! Love the Mississippi Sheiks' tune, but the Dylan video isn't available for play here. (I'm determined to track it or his mp3 version of the song down though.)

Yes I'm with you there TS. I wish I persevered in the 60's. Thought of you last night I watched London Town. Pleasant little movie, with our hero taking centre stage.

Regrets, I have many... but yes, I'd have focussed more on the guitar than the tenor horn when I was a teenager. Nobody ever pulled by playing the tenor horn.

Nice bit of guitar work from the Nobel Prize Winner there.

I liked both versions, but the original shades it for me. I went looking for other versions on a videosharing site and found a shouty-metal-american song which is, of course, a right load of old tosh.

When folks have asked me if I play an instrument my standard reply has been, “Yes, I play the record player,” so good for you that you got as far as trying to learn this song on guitar.

Blues hound that I am, I’ve never really cared for the Sheiks, but have always liked this version of “Blood” from World Gone Wrong; the high point of the album for me.

That's such a great photo - you look like a young Paul McCartney!

I understand your regret - it must be brilliant to just be able to pick up a guitar and play it. I managed the recorder, and for a while I had a bass guitar and could hammer out a few rudimentary basslines on that - the Slits' New Town was probably the first song I could actually to get to grips with - we had a little drum machine thing that we could programme and Mr SDS used to add the chords.

He said to tell you he wished he'd learned to play guitar as well ;-)

Like you it was the '90s before I bought myself a guitar and went for lessons - Not as easy as it looks is it? Also I didn't bank on the callouses you need to build up on the tips of your fingers in order to play without pain. I got as far as learning Leaving on a Jet Plane, Colours of the Wind (very nice) and Blowin' in the Wind but then kind of gave up. The guitar is still in the loft and I still have all the books though so maybe still time to revisit it some day.

Of course I meant "Colours" by Donovan - The other is from a Disney movie (from my daughter's childhood music collection)!

Marie. Good to hear from you, hope you're keeping well and enjoy Bob's version when you track it down.

Old Pa. He's back! Hope you had a good holiday.

Rol. Well I'm sure the tenor horn was a talking point. The sax would've been a cooler option though!

George. Thanks for the warning - I'll be sure to give that one a body swerve.

Frank Jive. Bob's version was a real stand-out for me too - excellent video as well.

C. I seem to remember you telling us a little about your bass skills some time ago. I feel a bloggers supergroup coming on.

Alyson. For a moment there I though that you'd created a Donovan mega-mix medley of 'Colours' and 'Catch the Wind'. Have your guitar on standby in case the blogging supergroup idea takes off!

The only option was to try to pull other tenor horn players.

Which I did, on more than one occasion. (Try to, never actually pull.)

If you all come round to mine I'll show you how to play three chords. That's all you need; never did the Quo any harm.

Just checked my guitar book and it was not indeed Colours by Donovan that I learnt to play but Catch the Wind as you suggested - All mixed up in my head now along with that other classic Colours of the Wind!

One of these days I'll pick up the guitar again and the "blogging supergroup" of amateurish instrumentalists will record and share their amazing compositions - Then again.....