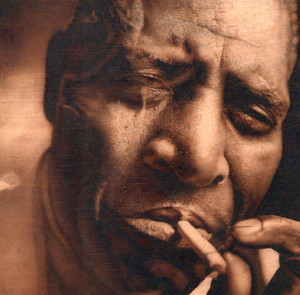 Thanks to his imposing physique, as a young man Chester Burnett acquired the nickname Big Foot Chester, before ultimately earning immortality as Howlin' Wolf. In the 1930's, Wolf gained musical inspiration from contemporary performers such as Charlie Patton, Blind Lemon Jefferson and Sonny Boy Williamson II and even played with the legendary Robert Johnson, while his trademark howl emerged as a result of failed attempts to approximate Jimmie Rodgers' signature 'blue yodel'. Many of his classic recordings throughout the 1950's and early 1960's were written by the great Willie Dixon, though my own favourite Howlin' Wolf track is 'Tired of Crying', an obscure self-written oddity, which for 15 years I only owned on 'From Early 'Til Late', a poor quality 1979 bootleg LP of unissued and alternate recordings. The song eventually became more widely available when it was included on a couple of official career retrospectives in the mid-1990's.

'Tired of Crying' was recorded in the Summer of 1969, a one-off studio run through, before being abandoned and, for all intents and purposes, forgotten. Cues are missed, instruments are out of tune, the speed varies dramatically and the melody bears a more than passing resembalence to the masterful 'Smokestack Lightning', which was written and recorded by Wolf 13 years earlier. But it swings so effortlessly. And those horns are so deliciously woozy and off kilter. It sweeps me up every time I hear it. Sometimes I ponder that if Wolf had perservered with the song for a little longer, perhaps we'd have a better, more solid performance to enjoy. Those thoughts pass quickly though. In spite of all its imperfections, because of all its imperfections, 'Tired of Crying' sounds just about perfect to me.

For all I bang on about the importance of lyrics, I could have listened to just the bit with him singing "I'm tired of cryin'" for three minutes and I'd have been happy. When the rest of the story came in, that was just the icing on the cake.

Never heard this one before and I'm a long time fan. It is kind of a mess but the stuck-needle repetitiveness and Wolf's falsetto howls . . . well, what else do you need?

The Swede, that fantastic voice of Chester Burnett, just gets to you every time. The song does sound like a remake of Smokestack Lightning, though - I absolutely love it.