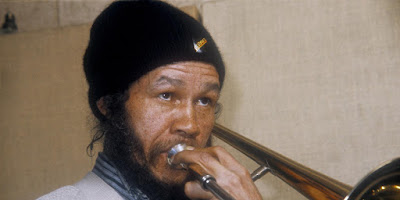 Rico Rodriguez was famously adopted by the ska revival movement in the late 1970's, playing with The Specials and eventually releasing two albums under his own name on the 2-Tone label. Prior to that, by the time he recorded the excellent 'Man from Wareika' for Chris Blackwell's Island Records in 1976, Rico was already a 15 year veteran of the the UK ska and reggae circuit. The US release of the album made history by becoming the only reggae LP to be issued on Blue Note Records. A dub version of 'Man from Wareika' was released in 1977, though this has been tough to track down in recent years. In 2016 Island did the right thing and reissued both albums as a double CD with 14 bonus tunes from the period - it's a highly recommended set.

This just makes me think of student days again - Really only know Rico from the Specials and Rudy but a great blast from the past.

One more thing - I've dropped the Alfie from my blog's site title - totally sick of it and that song. As you've been kind enough to add me to your sidebar could you please do a bit of an edit? Thanks

Such a huge part of the Specials' sound. As for Rico's own work, I only have what appears on the 2Tone story double disc. After your post, thinking I need to get the double disc you mention.