Spake He With His Dying Breath, 'Life Is Done, So What Is Death?' 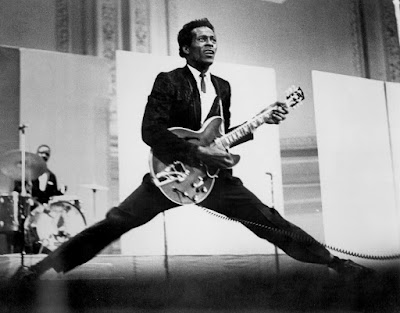 With the passing of Chuck Berry over the weekend, Jerry Lee Lewis (81) and Little Richard (84) are now the last surviving original rock 'n' roll pioneers. Chuck of course was unique among his contemporaries, by virtue of the outstanding poetry of his lyrics. Newly recorded material is due for release later this year, but the last album Berry issued in his lifetime was 'Rockit', way back in 1979, a record that concluded with the extraordinary spoken word 'Pass Away'. In 1986 Chuck and Robbie Robertson sat down in front of a film crew to document an even more extraordinary performance of the piece.

I don’t know what the Guinness world record is for years between studio album releases. 1979 sure was a long time ago. RIP

Lovely post, Mr. S. What a great storyteller he must have been!

P.S. After reading your comments, I checked all of the links and I couldn't detect any problems from my end. Maybe your security settings were raised? Also, perhaps you wouldn't mind re-posting the link again? Ta!