The Revolution Starts at Closing Time 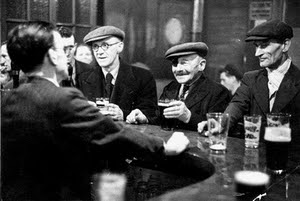 After visiting both of my Aunts in London for a couple of days, I spent Saturday evening in deepest Essex with two of my oldest friends. There was a time when we would spend two or three nights a week putting the world to rights and arguing about music over a succession of warm beers in the corner of a smoky pub, steadily growing less coherent as the hours wore on. But that was 35 years ago. These days, it's a logistical nightmare to get the three of us together, in spite of the fact that we live less than 70 miles apart. In fact Saturday was the first time we've all been in the same room for over 18 months. Though the alcohol didn't flow in quite the way it used to - one of my pals was driving and I had a bit of a dicky tummy - it was a joy to catch-up. We put the world to rights and argued about music just like the old days, but most of all we laughed - a lot.

In the halcyon days of the early 1980's, this was our anthem.

Serious Drinking - The Revolution Starts at Closing Time
Posted by The Swede at 07:00

The link's not working, but I was intrigued by that so I popped over and had a listen on youtube. I think I've heard the name before but never any of the songs. Gone on the list.

Oops. It helps if I drop the relevant file into the box. It's all present and correct now. Thanks for the heads up Rol.

Is that song any relation to " "As Soon as This Pub Closes (The Revolution Starts)"?

(UToob is telling me the video for "The Revolution Starts at Closing Time" is not available to me.)

Not the same song FurryBootsCityBoy, but a similar theme. The link is repaired now so you can check out Serious Drinking for yourself.

Glad you managed to catch up with the old friends - Most of mine are only 100 miles away but again it can be a year or two now between catch-ups.

Like this song a lot btw - reminds me of student days.

I always love hearing about old friends reuniting - sounds like you had a perfect time and I hope you'll have many more to come in spite of the difficult logistics. I'll have mentioned it over at my place before but I really appreciate my two old schoolfriends with whom I meet around twice a year, we go back more than four decades (oh god, just typing that made my heart stop for a moment there!) and there is little that beats that kind of easy, unconditional relationship and those times spent with them as we all age together! Someone (can't recall who) once said, when we look back on our lives it will be the good times and the people we'll remember most, not our material possessions. Or something like that, anyway!

Glad you got to have a laugh with friends from the past. Sounds as if you has a good time. The world needs putting right for sure. That song certainly sums up your post nicely.

Alyson. You're dead right. Regardless of how long it's been since we last met, we always seem to just pick up where we left off.

C. I don't have a very wide circle of friends to be honest, but those I do have I feel as if I've known forever. Easy, unconditional relationships as you so rightly say.

Chris. We were a very righteous bunch when we were young, making great plans in the pub about how we were going to change the world for the better. Of course by the time last orders were called we'd usually either forgotten the plan or were too drunk to carry it out - hence the relevance of the song!