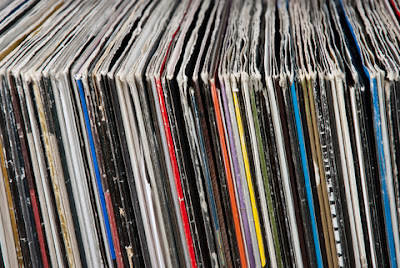 Over the past few weeks, a succession of time and brain-space constraints did their utmost to put the kibosh on my attempts to pull together a 2016 end of year round-up. As a consequence, the LP re-evaluation process was a lot less thorough than I would've liked and some worthwhile stuff will have no doubt slipped through the cracks. Before moving on to my albums of the year though, I'll kick off with ten individual tunes (11 actually) that I've returned to time and again in 2016 - these are either stand alones or (spoiler alert) taken from albums that finished just outside of my Top 20 of the year. In reverse order, natch.

A well thought of band that I've never really got to grips with until now. 'One Day All of This Won't Matter Anymore' is a very good LP and 'In Waves' is irresistible.

The lead track from his third solo album, Tyler has also played with Silver Jews and Lambchop. A marvellous tune that stretches out like a wide open, erm, highway. If it isn't picked up for a major motion picture one of these days, then someone is seriously missing a trick.


7) Vanishing Twin - The Conservation of Energy

Formed in 2015 by members of Fanfarlo, Neon Neon, Broadcast and Floating Points, Vanishing Twin make a warm and inviting pop noise, tweaked with a gentle hint of esoteric psychedelia. Their videos are very cool too.

It's been a year of consolidation for Meatraffle following 2015's fantastic 'HiFi Classics' LP. In 2016 they put out just two tunes (that I'm aware of), 'The Bird Song', a limited edition Speedy Wunderground 7" and 'One Track Mind', which appeared on a various artist Trashmouth Records EP for record store day. One of my favourite bands out there right now.

'The Good Life Never Ends' was written by the late great David McComb of The Triffids for his final band Costar, though his recording has never received an official release. The song clearly means a lot to The Blackeyed Susans, as they previously recorded an intense live reading of it in 2008, for a David McComb tribute album.

The album is good, but 'I'm in Love' is a song right up there with their very best.

Along with Meatraffle, Sleaford Mods are my favourite British band of recent years. As serious as your life and funny as hell.

A cracking tune, recommended to me by more than one of my blogging chums. An absolute standout from 'Where Are The Grey Clouds Going?', released back at the start of 2016. Pop perfection.

Very possibly the best pop song about 'apathy and hating yourself'.....ever! If the bassline doesn't move you, you seriously need to get your ears syringed. I'm expecting big things from this lot in 2017.


My most played track of 2016 was actually a reissue, so not technically eligible for this rundown. I've enjoyed the song so much this year though, that my review wouldn't be complete without it. My sincere thanks go out to blogging chum Brian for introducing me to this absolute nugget.

(The Hipflasks album is available to order here)
Posted by The Swede at 13:53

Hi, Swede. Thanks for the mention. If I get around to it, Hipflasks will find a place near the top of my reissues list. There are a couple of songs here I absolutely love and should have been on my own list of top songs, particularly your choice from the Blackeyed Susans. Man, do I miss the Triffids. I was with the peanut gallery on Slow Club last time around, but I never did get this latest one. This is the only song I have heard so far. Haven't bought an album from Teenage Fanclub in many years, but I see why you like this song so much. Very strong list, sir. Well done.

Thanks for checking out the tunes guys. Albums to follow next week!

Oh, I don't know how you guys do it - these top 10s, 50s, 100s etc. I couldn't even start to know where to begin to commence putting anything into any kind of order! I'm too much of a flitter. But I know and understand that a lot of consideration and heartache (and headaches) go into these all important end of year lists - so any act that makes your final list should feel extremely honoured!

(And I'll to at least catch up with listening to all of them soon!)

A feW for me to check out there Swede

First heard Girl Ray's Trouble on your blog earlier this year, liked it and probably forgot about it to be honest. No I AM being honest and I DID forget about it but.....hearing it again just now reminded me what a gem it is. Just tweeted it myself (gave you credit of course). Your perseverance has paid off. You're not a friend of the band by any chance? Many thanks!

Girl Ray's 'Trouble' is jjust so bloody infectious. I may have to be a copy cat and grant it #1 status also.

C. Haha, I'm way less organised than some of our fellow bloggers, which is why I find their lists so fascinating - I miss so much. A musical year never truly ends though, it merely gets summarised. There's always more to discover.

Spence. Not a friend of the band, just a fan! Glad to hear that 'Trouble' got it's hooks in you eventually.

Make it so John. It is ludicrously catchy isn't it?

I never feel qualified enough to come up with a list of new stuff compared to you guys
other than Ette, Teen Canteen and Honeyblood and the new King Creosote I would probably struggle

I'm with C! I don't know how you keep up with all of this new music. (Well - how DO you keep up with it all? - Radio? U.K. stations must be a lot more interesting than those in North America.) Of course, I'm still plundering all of the vintage stuff I haven't heard yet, so please don't let me get hooked on these new (to me) sounds.

Love that Blackeyed Susans song, thanks - and you already convinced me to buy Girl Ray a couple of weeks back. Couldn't really get into the Teenage Fanclub album myself: it sounds fine but ultimately didn't seem to be about anything. Then again, that might be true of much of their work, which I love a lot more, so... I dunno.

Vanishing Twin and Ultimate Painting came close to making my final list this year. Man I could have done a Top 100 (but then I would be The Quietus or Consequence of Sound) I think and that's just because music was, more than it has been for some time, a refuge from all the bullshit 2016 threw up. I think I will do a New Year's Day post with the best of the next that could have/should have been in my final list.

Great Stuff Swede. I must confess I was really disappointed with the latest Slow Club album, probably because I loved the last one so much and that due to pledging for it it was highly anticipated. I keep trying with it but only a few tracks have stuck.

Unlike most of you here I concentrate on the nostalgia element of revisiting old songs, and write about what that conjures up. I freely admit that I have lost the plot as to "new music" pretty much since the turn of the millenium, so no top 10s from me I'm afraid! Over the holidays however I will find time to investigate some of these choices and hopefully discover a few new gems to add to "the tracks of my (middle-aged) years".

Appreciate however how you take the time to drop by my place and leave comments as I tend to take a very different approach to our musical memories!

Bloody'ell TS that has put spanner in the works. Was trying to do my top 20 but there are a few in there I have not heard and are worthy of any 2016 compilation. I hope you are doing the next 10 too. I better get my top 20 done before that comes out. Great selection as usual of course.

Thanks for checking out and commenting folks. I have to say that this year, for the first time for a long time, I feel woefully out of touch, which is why I'm particularly enjoying the various end of year round-ups. The never-ending list grows longer!