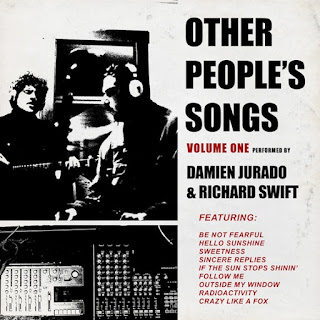 Initially only briefly available as a download back in 2010, Damien Jurado & Richard Swift's informal album of covers, 'Other People's Songs, Vol. 1', has this week received a belated official release via Secretly Canadian. On the record, Jurado & Swift re-imagine an eclectic mix of tunes from the likes of Kraftwerk, Yes, Chubby Checker, John Denver and the cast of Oh Calcutta! Here's their lovely reading of 'Hello Sunshine', originally released in 1976 on the self-titled LP by Relatively Clean Rivers. The Relatively Clean Rivers album has itself had the full reissue treatment in recent years, bringing down the price accordingly, though if you prefer your vinyl to be of the vintage persuasion you should head over to Discogs sharpish, where a mint original awaits you for a mere £1763. Can anybody lend me a fiver?

Relatively Clean Rivers - Hello Sunshine
Posted by The Swede at 07:00

I think there may be a decimal point missing there Swede!

That was amazing. Kudos to Secretly Canadian for giving it a legit release lo those many years.

This is actually the first prize is the wycra Christmas competition.
TB.

Can't decide which I prefer, though the covers album sounds interesting (and I just added it to my emusic list). I like eclectic covers collections. Like that Kozelek album which I'm still listening to.

Couple of nice ones there. Don't think I would pay that asking price 'tho.