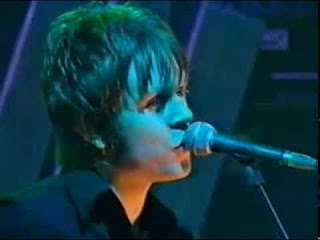 The success of the Britpop movement in the 1990's persuaded the major record companies of the day to throw money at many bands who fit the required profile, in an effort to keep a good thing rolling along. A lot of bands were signed - some good, some merely derivative, but few of them were given any time in which to properly develop. In previous decades, artists might have been allowed two, three or even four albums to learn their craft and find an audience, but by the mid-90's if success wasn't immediate, bands would invariably find themselves out on their ear pretty sharpish. I was taken to see many 'next big things' by effusive record company reps who sang their praises long and loud, at least until the first couple of singles flopped, at which point they were quietly forgotten about - and it was on to the next 'next big thing'. It was a particularly nerve-wracking time to be in a newly signed band, for whom Britpop must have been both a blessing and a curse.

Jaguar were one such band. Led by singer and guitarist Malcolm Carson, they were signed to Warner Brothers in 1997, with a clutch of promising singles following in quick succession. These, I remember, were promoted vigorously by Warners, though to little avail. After an enforced name change (to Carson) and in spite of some success in Japan, by the time their album 'A Vision' appeared, the writing was already on the wall - band and label parted company, then the band imploded altogether. (If you'd like to journey back to 1998 to check out the album, a YouTuber has uploaded the whole darned thing here). For me, the most impressive Jaguar tune is quite unlike anything on 'A Vision', it's a dubby instrumental entitled 'Intro to Nowhere', tucked away as the 4th track of a CD single. If the band had been given the freedom and opportunity to develop, perhaps we would've eventually heard more music of this quality from them.

Jaguar - Intro to Nowhere
Posted by The Swede at 07:00

This was around the same time I worked in the radio station record library (what an antiquated idea) and was showered with similar freebie gigs to the next big things (plus quite a few ACTUAL big things). I vaguely remember Jaguar, and I agree with what you say about the tragedy of some of those bands not being given space to develop.

True enough. But its a double edged sword. These were the last days of the record industry in its old form- these bands would never get record company backing today.

These years are a barren wasteland for me. Just about completely gave up on music for a while there. I don't know many Britpop bands, and I have never even heard of Jaguar, but this doesn't sound too bad to these ears. As Adam reminds us, the industry has changed so much since then.

Beautiful instrumental. Great find! I can hear a bit of trip-hop influence.