That's Not a Virus 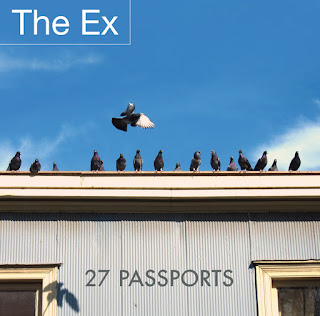 Mrs S & I are still in London, drinking gallons of tea, consuming our own body weight in Hobnobs and driving old ladies around in our new (old) car. Newsflash - it doesn't have a CD player. Insert screaming meme here. If the hastily purchased new wheels had come with a reasonable sound system (like John Medd's all singing, all dancing set-up f'rinstance) I would surely have taken '27 Passports', the new album from Dutch band The Ex, along for the trip. It's their first regular LP in 8 years, being otherwise occupied by singles and collaborations in the intervening period. The Ex make a pretty darned great post-punk noise and have been in existence since 1979, when post-punk was actually still a new thing. Check out the album here, but meanwhile enjoy a live performance of 'That's Not a Virus' from 2015, a tune that originally appeared as a 7" b-side the previous year.

Hope all's going smoothly for you in London - and that the aunts are keeping well too. See what you mean about the Ex maintaining that original post-punk sound - it would be hard to put a year on it!