I've been largely absent from Internet musings over the past seven days, thanks to a long planned week of decorating. Long planned by Mrs S that is. Long dreaded by yours truly. If I don't see another paint brush for the next couple of years, you won't hear any complaints from me. Still, we've managed to tick a few little jobs off of the very long list of stuff that needs doing in and around the house, which is all to the good. 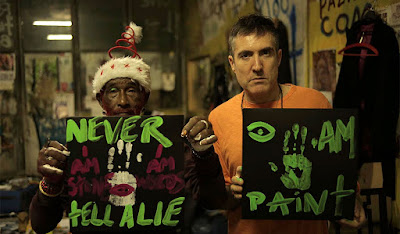 And now for something completely different. Saturday Scratch traditionally deals in wicked cuts from a bygone age, but on this occasion the selection is virtually bang up to date. In April 2015, XL Recordings boss Richard Russell, trading under the Residence La Revolution moniker, issued a 12" single, 'I Am Paint' and the tune, a stabbing aural collage, features heavily sampled chunks of Lee Perry vocals high in the mix. Each sleeve of the ridiculously limited run of 250 copies was personally hand (and foot) painted by Russell and Perry themselves in one all night session, documented in the accompanying clip. The resulting artifacts weren't distributed through traditional outlets and were only ever obtainable via a bartering system from the RLR website. Intriguing stuff. Read more here.

That clip has put the biggest smile on my face of the whole week. Fecking awesome stuff, Swede. Thank you.

Good to see old Lee still having a bit of fun. I can only hope to be a fraction as cool as he is if I ever reach is age. Reminds me I have a shed load of decorating to do around here.

Glad to see that the tune and clip went down so well. Swiss Adam - you nailed it!

Well not a great fan, decorating that is, Lee of course I am a fan...in defence of decorating and ironing (does anyone iron anymore) is I found it a great time to listen to music.