On Saturday we took an early morning walk down the lane, along the river and back across the marsh. A mist clung to the ground as we left the house, but within half an hour the sun burned the moisture away, the temperature rose and the intended short stroll stretched out to more like four or five miles. 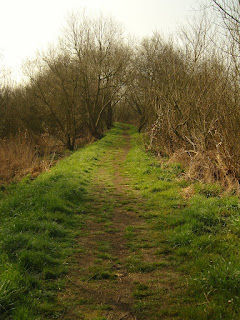 It was gloriously warm and tranquil along the riverside, the chatter of birds our constant companion. Then I heard a bird song that stopped me in my tracks. I shook my head and walked on a few paces before I heard it and stopped again. it was a chiffchaff I think, or maybe a tit, but whatever the breed - it was whistling the chorus of 'Circus Games' by The Skids! 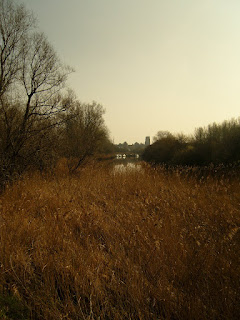 Next time I'm down that stretch of the river i'll be shouting out requests - the sax-line from 'City of the Dead' by The Clash perhaps or Steve Diggle's insistant guitar pattern from 'ESP' by Buzzcocks. Who new I had such talented neighbours?

Those birds have always been at the cutting edge. How about the guitar solo from 'Boredom'?

The guitar solo from 'Boredom' has to be a great tit, I think... its Springtime call otherwise known in this household as the 'squeaky wheelbarrow'.

I once knew a coffee machine that sounded like Supergrass's 'Richard III when I pressed the buttons for white decaf no sugar, but I much prefer the idea of a bird's version. Perhaps my local Mr Blackbird could give it a try...

I considered Boredom, but thought that it wouldn't be challenging enough for the little chap - he's set the bar so high already!

Playing Richard III on the coffee machine? Sounds like something Roy Castle would've attempted on Record Breakers back in the 1970s!