Hooded Fang's self-titled debut from 2010 was an enjoyable retro-sounding affair, but over the following few months 'Nuggets' must have been on heavy rotation in the band's rehearsal room, as 2011's 'Tosta Mista' boasts more of a 60's garage-rock vibe. 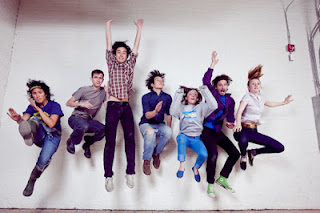 It's a slightly uneven album, but at it's best it's very good indeed. Here's the best of the bunch and one of my fave raves of last year.

A new one to me, but that track is really good....worth a follow up there!

Read about this the Stool Pigeon I acquired from my local record store, so good to go in there once in awhile. I've heard the track 'Clap' and 'Tosta Mista' the latter being the pick fo sho!!

You're so right about the idea that they must've been listening to 'Nuggets' - if you had told us it was an original '60s track I would have had absolutely no hesitation in believing you.
Any way it's nice!