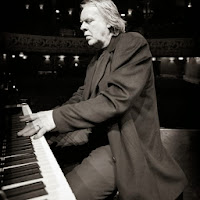 Off the top of my head, I can only remember ever meeting a mere handful of my youthful prog-rock heroes in the flesh, usually while bagging post-gig autographs in the 1970s. One, who shall remain nameless, was, disappointingly, an utter arse, the combined membership of Van Der Graaf Generator were very amiable and Rick Wakeman, who was friendly and extremely funny.

A couple of evenings ago, round at our local petrol station, I was surprised to see Rick Wakeman walk across the forecourt in front of me, from the shop back to his car. I've no idea what might have brought him out to my neck of the woods, but was suddenly taken with the urge to go over and renew our brief acquaintance of nearly 40 years earlier. Halfway out of the car, though, I changed my mind. What could I possibly say to him that would justify invading his privacy? 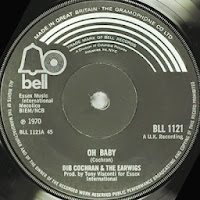 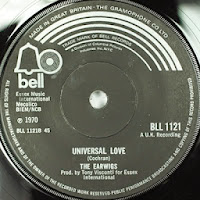 In retrospect, perhaps I could've quizzed him about his involvement in a short-lived group, Dib Cochran & the Earwigs, which also featured Tony Visconti on bass and vocals, drummer John Cambridge (from the band Juniors Eyes) and a certain Marc Bolan on guitar. Dib Cochran & the Earwigs issued one single, 'Oh Baby', in September 1970, a month before T.Rex released 'Ride a White Swan'. What if 'Ride a White Swan had bombed? What if 'Oh Baby' had been the hit? The 1970s might have been a very different place.

I've read about this session but have heard any evidence until now. Thanks! Didn't try too hard with the b-side, did they? I'm pretty 'pumped' by your close encounter with Rick. I'd have probably left him alone as well but may have embarrassed myself by whistling one of those wild Moog solos from 'King Arthur'. Good on you for being cool. I expect he was stopping off for a microwave curry to take home.

Ah, I wonder what he was doing in your neck of the woods? I reckon SB's right about the microwave curry.

You could've just said quietly under your breath but loud enough for him to hear, "Dib Cochran and the Earwigs"... I'm sure he would have been impressed (as am I!)

Interesting one TS...I have had a few close encounters in the past but like you I could not go thru with it and glad I did not make a complete ass of myself.