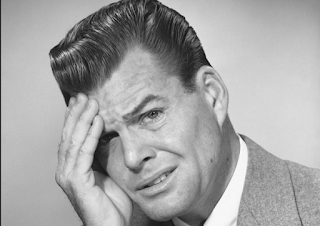 In a hurry a little under a month ago, I mistimed a swoop beneath one of our low door-frames and smashed the top of my skull into it. It wasn't the first time it's happened and it won't be the last. The frame in question is over 200 years old and made of solid oak. It's also a good foot shorter than I am. I've had a headache ever since the incident, intense at first, but now more akin to an uncomfortable lingering hangover. I've been somewhat prone to headaches for as long as I can remember, usually caused by the most innocent of circumstances, so initially I wasn't overly bothered by this one. Last week, beginning to feel a little concerned, I finally decided to take myself off to see a doctor at the local medical centre. He didn't go near my head, instead he waggled his fingers about in front of my eyes and checked my blood pressure before pronouncing that, in his opinion, my headaches are unconnected with the recent violent encounter with the door-frame - although he couldn't actually say for sure what is causing them. 'Take more painkillers' was his advice. I told him that, on the contrary, I've actively been trying to reduce the 4 times a day I've been taking them, but he was insistent. 'No, no. You need to take more'. Should I come back if the symptoms persist? 'Yes,' he said, '...give it 9 or 10 weeks'.

Thanks Doc, that helps a lot.

OUCH! You were right to take yourself off to the Doctor. I've encountered his type myself - usually (but not exclusively) an under-40 so-and-so with no bedside manner. Hope if your discomfort continues, you'll see someone else.

Painkillers - the new panacea now antibiotics are not allowed! Working for the NHS, I can confidently state there are some excellent doctors around. My local GP surgery is lucky that we have some particularly good ones. Unfortunately, there are more and more out there that are little more than quacks. The type who think if it can't be fixed by co-codamol, it can't be fixed at all. No wonder our A&E departments are bursting at the seams!

For what it's worth, I recommend you get a second opinion...

I can retrace the pain by reading these words. Hope your headache will vanish soon.

Aargh. Horrible. I agree with the comments above, might be a good idea to get a second opinion. As in any field, I don't think every doctor can know everything about everything, and with something as important as your health and with this clearly on your mind, it won't do any harm to at least get another's viewpoint.
And then install a flashing neon sign on the beam ;-)

You have my sympathies Swede. I've had a health scare this week and it's no fun at all.
Swiss Adam

Never took you for a headbanger!

Seriously though, I've encountered doctors like that in my time... and also ones that say you should only take painkillers when you absolutely need them or you lessen their effectiveness (and open yourself up to side effects). Another one of those getting older things: when you're young, you have faith in doctors... as you get older, you start to realise many of them are as clueless as the rest of us!

When you're young, you bang your head all the time and nothing comes of it - When you're older it's a bit more serious. Both our surviving parents ended up in hospital after falling and banging their heads but they were both in their 80s - Don't want to alarm but it did make me a bit more cautious about such things so if it persists you should definitely go back or get a second opinion. For the record neither of them had headaches though, it was more confusion and disorientation, but the painkiller route is not a long-term solution.

Marie. His bedside manner was fine - he just wouldn't listen to what I was saying - very frustrating!

Robster. I support the NHS 100% and hope that this guy (who isn't my regular doctor), was just having a bad day.

C. Ah, but then I'd just hit my head on the neon sign!

SA. Sorry to hear that - I hope all is well.

Rol. I just want to get to the cause of the problem, not mask it. He couldn't seem to grasp that concept.

Thanks Alyson. I'm generally feeling much better now, though am still in discomfort when I lie down plus the intensity of my long-term tinnitus problem seems to have increased considerably. I blew out two gigs because of how rough I felt last week, a sure sign that all was not right. I'll give it another week and see how I'm doing.

Just catching up. How's your head? I certainly hope you're feeling better. As the man said, take care of your health and get plenty of rest.