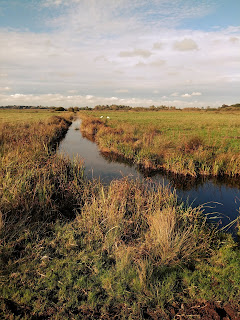 I've had the week off - actually I'm still off and don't go back to work until Thursday. I've been hard at it for the past few months, taking every hour of overtime I've been offered, keeping mind and body occupied, so I was pretty knackered and ready for a break. Of course as soon as I stopped, I immediately became incredibly anxious and stressed, unhappy in my own skin and missing the person who is no longer sharing my life more than ever. So, each morning for the first half of the week, I took myself off to one of the many nature reserves in this part of the world, where I found myself able to embrace my solitude by simply walking, breathing and being - for hours at a time. It was some kind of wonderful I can tell you. Of course I had to return to the pain of my actual existence eventually, but those walks were encouragingly positive glimpses into a reality beyond the one I find myself trapped in at the moment. 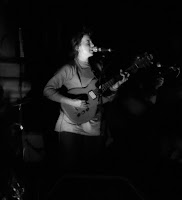 Then on Wednesday evening I went to see Rozi Plain play in Norwich and on Thursday ventured down to my old hometown of Ipswich to catch her in concert again. Long suffering visitors to this place will already be all too aware of my immense adoration of Rozi's music. Today I'm off to Cambridge, to reconnect with my old buddy Robyn Hitchcock. Then, after a Sunday lunch in the company of a group of old friends, on Monday morning I'll be winding my way down to this nation's capitol to catch Robyn again for what is being touted as something of a career retrospective show at the Union Chapel, where he'll apparently be joined by guests aplenty, including more than one fellow former Soft Boy. It's all very exciting stuff for this old Fegmaniac.

I won't go on and on, but please allow me to reiterate once again how very humbled and grateful I am for every single message of moral support that has been sent in my direction following the recent posts regarding my personal circumstances. I appreciate every kind word more than you could possibly imagine. I'm appalling company at the moment, really dreadful, collapsing into a sobbing heap without warning at every turn, but one day, one day, I hope I'll be able to express my gratitude to at least some of you personally.

Good to hear that these few days off were good for your body and soul, Swede. It is good to have plans and dates for your mental health. Keep on and I am jealous that I have no chance to see Rozi round my place.

At first glance at the picture I thought you'd located a ditch for the Prime Minister. Look after yourself Swede.

You like Rozi?
Kidding. This sounds like a splendid time off, Swede. So jealous about this retrospective Hitchcock show.

Enjoy your time off.

Walking is great therapy so a fine idea for your time off. As is going to see some of your favourite acts. Enjoy.

Shame we can't be better company for you at the moment except at the other end of a keyboard but no need to feel humbled at all - This is a fantastic, caring community. My holiday hideaway is at your disposal should you want some walking therapy up in the Highlands? Just say the word.

I just, belatedly, noticed your comment Alyson. As I've mentioned many times over the years on these pages, I desperately want to explore the Highlands and islands before the old legs give up on me completely, so thank you for the offer. One of these days I might just take you up on that.