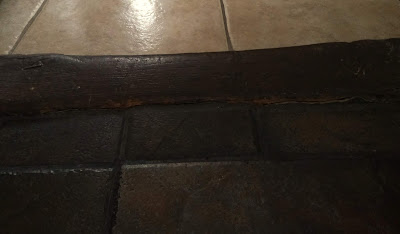 After driving myself half mad for the past couple of months bouncing around the empty rooms, I've bowed to the inevitable and put my house on the market. The place was initially very much Mrs S's vision, but it's a home that I truly grew to love. Now though, it's an echoing shell - an ever-present reminder of all that I've lost. Coming back from work every evening to the silent darkness is particularly painful. It's a quirky property, there's no two ways about it - and therein lies the possible problem as regards finding a buyer. Whoever takes it on must have the same vision thing that Mrs S had eight years ago.

The bathroom only became attached to the main body of the property, by way of an extension, 50 years ago. For the previous 200 years it was the wash-house, separated by a couple of yards from the rear of the building. The wooden door-frame is original and the step shows a considerable dip from the weight of the countless feet that have crossed its threshold over the past two centuries, mine and Mrs S's included. I wonder whose will be next.

No words to make you feel better Swede but you may feel better when you move. One thing, our last house was very quirky, it was like a Tardis from the outside and a very strange layout when we went to sell I thought that we would have trouble as although we loved it we weren't sure it would appeal to anybody else. But we ended up selling very quickly with two separate people really wanting it.

That's encouraging Drew, thanks. The layout of this place is, erm, unconventional to say the least, but I reckon it has a ton of potential to someone who can see beyond its current condition....and my many piles of stuff!

Although I have never been there, I feel like a frequent visitor to your unique home. From all of the descriptions and photos we have seen through the years, I feel confident a buyer is around the bend. Best of luck, pal.

You'll still be moved before Brexit.

I think there's a lot to be said for unconventional houses. Having said that, our current one is horribly conventional, but needs must at the moment. I hope to live somewhere a bit more quirky again when the boy is older.

Best of luck with the move, I hope it brings you what you need.

As Drew said, I also think it is good decision to move and leave the memories behind. Hope you will find a new destination that fits your soul well very soon Swede.

Sorry it's taken me a while to get round to commenting on this post. I read it a while back but felt I couldn't find the right words. I think I can only echo what has already been said, and as someone who lives in a quirky old house, which I think is also probably a bit smaller than yours, there is definitely something attractive and charming about that alone, so I am sure you will find a buyer who will appreciate its individuality as much as you have. (Wanna swap?!)

It sounds as if you've given it some thought now and decided it's for the best, so good luck with the house sale. There are plenty of people out there who still want quirky, unconventional properties so I have no doubt you will find someone who will love it as much as you have. All the best with it all and hope you find something else that you will suit you well.