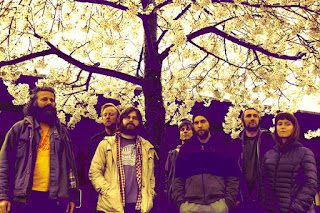 Hills formed in Gothenburg in 2007 and make music focusing on improvised grooves and rhythms rather than traditional songwriting structures. The band aim to '...create a feeling but not necessarily explain it through words...' Their third (and most recent) studio LP 'Frid' was released in 2015 on the excellent Rocket Recordings label in two separate limited edition runs.

Nice one, will investigate further!

A thumbs up from me too.