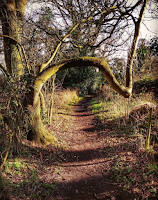 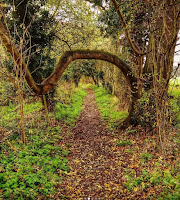 The Angles Way kicks off at Great Yarmouth and finishes, 77 miles later, at Knettishall Heath Nature Reserve near Thetford. Apparently it takes between 28-36 hours to walk the entire length of The Angles Way, but it's the dozen or so miles of the footpath that wind around my part of the world that I'm most familiar with. I took today's photos on the stretch that passes very close to my gaff, before it snakes off round the river and out into the countryside. The curve of this branch fascinates me and I find myself photographing it often - these two shots, one from each direction, were actually taken several months apart (click on them to enlarge). My instinct is to say that the bend in the branch was created over the years by endless walkers pushing it upwards or aside as they pass by, but perhaps it's just an interesting quirk of nature. The shape allows me to pass by in comfort anyway - no exaggerated bending of my 6ft+ frame required here.

To accompany the photos, a tune. 'Bend the Tree' appeared on the b-side of 'Ratchet Knife' (a different song using the same tune) in 1969, one of only two singles released by the mysterious Amiel Moodie & the Dandemites. It's a bit of rarity too. According to the Discogs listing, a mere 17 lucky people own the original 7" and 547 are on the lookout for a copy. Good luck with that. Only one has ever changed hands on the site and that was nearly two years ago. It went for a whopping £216.

That is fantastic. I am also intrigued as to quite why/how it grew like that - I like to think it knew it was over a pathway where people would walk and is therefore making a very considerate gesture!