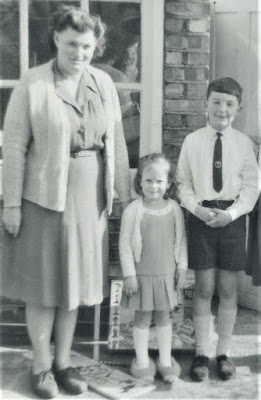 I'm just back from visiting my aunt in East London. She turns 92 in a couple of weeks and hasn't seen her New York based daughter in 18 months, but is nevertheless in remarkably fine fettle. I'm pretty damned sure that I couldn't have handled lockdown in total solitude as stoically as she has. Typically, she managed to find a few odd jobs for me to do around the house in the crippling heat of the past few days. As a result I've been climbing ladders, crawling around floors, deciphering impenetrable flatpack instructions and running a series of relatively straight forward repairs, all the while being updated on the marital and employment statuses of each of the respective families of my aunt's many former neighbours. The former neighbours themselves are all long dead, but my aunt continues to keep in contact with successive generations of their families, who are now scattered around the country.

I pulled out my phone on Wednesday evening for a surprise Skype call with my cousin, her husband and two of their kids. My aunt is fairly hard of hearing and struggled to catch the majority of the conversation, but they could see each other, which meant the world to all concerned. I automatically drifted into chirpy-jokey mode during the call, if I hadn't there would probably have been tears all round.

I can't be with my aunt for her 92nd birthday and obviously neither can her daughter at the moment, so we're immensely grateful to one of the children of those former neighbours, now a parent of a grown up child of her own, who is making the journey to London to visit her on the big day.

Jethro Tull - Back to the Family

Your aunt sounds like my mum (who turned 93 a couple of weeks back). Same generation - tough as old nails.

Lovely stuff, and your aunt must be so happy to see you!

I feel as if we know your aunt and cousin well because of your blog. Impressed by her ability to cope with the solitude of lockdown after lockdown, but as Rol says, they were built tough that generation. She will have been thrilled to see you.