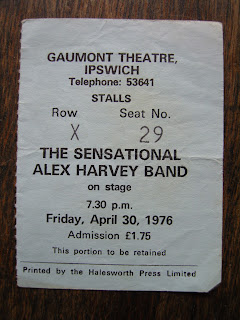 My flying visit to London last weekend was a real treat. The way things transpired I had just one full day with the whole family, but we made the most of it in spite of absolutely sweltering conditions. By midday on Tuesday I was on the motorway heading home and back to work. My aunt loved catching up with her grandchildren for the first time in five years, even if she found their accents a little difficult to decipher with her failing hearing. They all got together several more times throughout the week before the American contingent flew back to New York on Saturday afternoon.

Today apparently marks the end of this current heatwave, with cooler conditions due as the week progresses. I'm relieved to hear it, as from Thursday I'll be spending my annual three nights sleeping under canvas at a local folk festival.

On April 30th 1976, exactly a year to the day after my family relocated from London to Ipswich, I paid the princely sum of £1.75 to see The Sensational Alex Harvey Band in action at the local Gaumont Theatre. The band's 1974 LP 'The Impossible Dream' was a key record in my youth and they performed the whole of 'The Hot City Symphony' from it that night. After the show me and my gig-buddy hung around at the stage door and met Alex...and what a diamond geezer he was. Alex seemed quite old to us kids, though in actual fact he was only 41 at the time, but tragically had less than six years left to live.

You met Alex Harvey??
Well jealous!
Glad you got to catch up with your relatives albeit briefly

Because the venue was so local to us, we could always hang around after gigs and meet the bands coming out of the stage door, collecting their autographs along the way. I sold all those autographed programmes about 25 years ago and got a reasonable amount for them I suppose, but nowhere near what they'd be worth now.

Glad the London trip went well, Swede, and I hope the folk festival has been a blast... like you, I'm glad the latest heatwave is over - even though we were on holiday last week (the first two days were hell!).