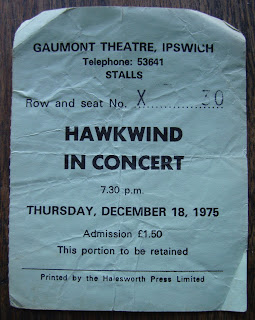 Ewww! That's a classic story, The Swede... I don't envy you one bit. (I had a girl throw up over me on an 'plane once, that was pretty bad!)

As for Hawkwind, always a had a (quite unlikely really) soft spot for them just for being who they were and doing what they did! My sister had 'Hall Of The Mountain Grill' so that was one of those early albums that seared itself into my consciousness from a young age. (She also saw them live too and came back with tales of Stacia that shocked me hugely!)

I know what you mean about that kraut/space/nascent punk rock of the track here too.

(Now... who are all these dapper chappies and well turned out ladies catching my eye on your header images these last few months? They're great!)

In my innocence, I thought it was love (or at least lust!), but in truth she just wanted a place to lay her head....after she'd vomited all over me!

Ah Stacia! Now I have clear memories of a naked dancing lady at that first Hawkwind gig, who I'd always assumed to be her, but apparently Stacia had quit to get married earlier in 1975, so I don't know who was up there!

I have a bit of a thing for old photographs. I just love these captured extraordinary ordinary moments in forgotten people's lives and have used a few of the images I've picked up along the way for my headers. I'm glad you like them, there are more to come!

Hawkwind...one of the greatest of all British rock institutions. I'm ashamed to say that I have never seen them live. Unbelievable, I know, but I did follow their recording career quite closely up until the 80's and have dipped in and out since. As for the gig with the vomiting girl...I feel your pain and I'm sure I'd have made the same deluded assumption. I can smell it all now - the dope, the sweat, the hippies and the vomit. Good times.

Oh, that's heavy. A lapful of vomit. And I bet she escaped with no recollection of the sorry event at all.

'Spirit of the Age' was one of the multitudinous tracks I listened to avidly on Radio Caroline in about 1977, when the station had a marvellously eclectic bent. I realised when revisiting the song recently that I know all the words, obviously absorbed passively on one of those radio nights when I should have been doing my biology homework.

SB. I gave the band another go (the 5th gig) post-Calvert, but with a combination of my tastes changing and their central focus no longer in evidence I came away disappointed and never really went back.

The dope, the sweat, the hippies and the vomit - good name for a Hawkwind tribute band!

Kolley. Funnily enough, the Marc show performance (minus Brock - he didn't like Bolan) was on my shortlist. I remember it well. I also remember that period of Radio Caroline very well, Loving Awareness anyone? The jingle is still stuck in my head, 'Thou art surely the all-time sucker'.

Two crackers,a cracking story and you really cracked me up! It was all going so well!

Old Pa. As Singing Bear so rightly put it - The dope, the sweat, the hippies and the vomit!

The Capt is the best front man I have ever seen live and I must have been to over a 1000 gigs in my lifetime. Saw Bob 6 times with Hawkwind/lords and every time it was a different wonderful adventure. Aman taken well before his time and a man that was light years ahead of his time. In short the guy was a genius!!

Well said Deegee and thanks for dropping by.