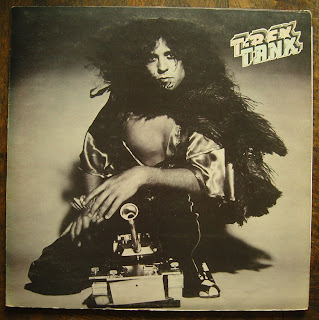 Oh yes, I too remember that evening so well. 'Mad Donna' was fab and 'Life's a Gas' a, er, gas. Marc looked like he was enjoying himself and Cilla was her usual toneless noise. It took me ages to actually buy 'Tanx', however. I went into something we used to call a 'record shop' at the time of uts release and noticed that there was a label stuck on the cover saying something like 'This stereo album is not suitable for cheap deck players'. Considering that the family radiogram was undoubtedly 'cheap deck' I felt I'd have to pass and be deprived of by favourite band's new record. Some time later I did cave and get it anyway and proceeded to slowly wreck it on the old 'cheap deck'. Probably had quite a few copies since. I thought it did mark a slight dip in qulaity from 'Warrior' and 'Slider' but there are still some strong things on it. Happy Tanxaversary!

You triggered a memory for me there too - not of seeing that TV programme I'm afraid, but of the tricky business of taping music from the TV via a portable cassette player... Positioning the mics just right and hoping they wouldn't crackle, then that tinny, distant sound you ended up with but it was the best you could get and it was amazing to be able to preserve it at all... How sweet too that you and your friends played it down the phone to each other, I can just picture it.
We've come a long way!
(Love SB's tale too of the 'not suitable for cheap deck players' label!)

Talking about taping from the TV.... my father had a speaker in the kitchen from the TV. I managed to wire my reel to reel tape recorded to it and got a direct take from the TV. I have on reel to reel Dylan live at the BBC somwhere in a garage. It may even be the best copy around. Wish I could have videoed it.
Never bought Tanx although I was a big fan.

Recording a TOTP performance of Daniel by Elton John on my Philips cassette recorder and our front door bell rings; it came at a point in the song where Reg's electric piano quite literally chimes the same note as said door bell. Even now, whenever I hear the line 'Oh I miss Daniel, oh I miss him so much', I'm waiting for my parents' door bell.

SB. The photo in the post is of my original, nearly 40 year old, copy. I say nearly, as I got my 'Tanx' exactly one month after it's release, for my 13th birthday. How am I so sure about the date? I also received a Dymo Label Maker on the same birthday and I used it to put a bloody date sticker on everything I purchased for the following few months!

C. I still have a few 'taped off the telly cassettes from that period. The two biggest obstacles to getting a good recording were the crackling microphone/twisted tape horror and trying to keep my Dad quiet! He was forever wandering around the house singing at the top of his voice, which I found irritating then, but, as I gradually turn into my Father, find myself doing now!

Old Pa. Good for Old Grandpa! I thought my Dad was nifty with leads and cables, but that sounds great. What other gems have you got hidden away on reel to reel I wonder? Find that Dylan at the BBC tape!

John. I know exactly what you mean. Somewhere I have my own cassette recording of 'Daniel' from Radio Luxembourg with the reception dipping in and out, as it always did, which makes the song sound incredibly spooky. On record it was never quite as gripping as that primitive tape recording.

At a time when none of us had very many records, my pals and I would share our LP's around to tape and there might be the odd click or jump evident in the recording. I still find it odd when I play my own copy of one of these songs all these years later and that noise isn't there.